#Girltalk I Tried Sugaring Brazilian On My Bikini Area

Last week I got the opportunity to tag along for my husbands business trip to Manhattan, New York, which coincided with our 14th wedding anniversary. I love New York so as soon as he got word he was going he knew it would be a resounding yes from me. It was especially nice that his bosses suggested to him that he may want to bring me along for this trip.  This was my second time in New York and I still feel like there is so much left for me to see that I haven’t yet explored.  I learned last time to forego the obligatory ‘Instagram outfit’ choices and prioritize for comfortable walking shoes, shorts, and comfortable tees. I did bring my favorite jeans, some pretty blouses, a dress, and some dressy flats for more formal events, but my daily sightseeing attire consisted of cutoff denim shorts, simple tee shirts, and sneakers or flat espadrilles. See the bottom of this post for my packing details. 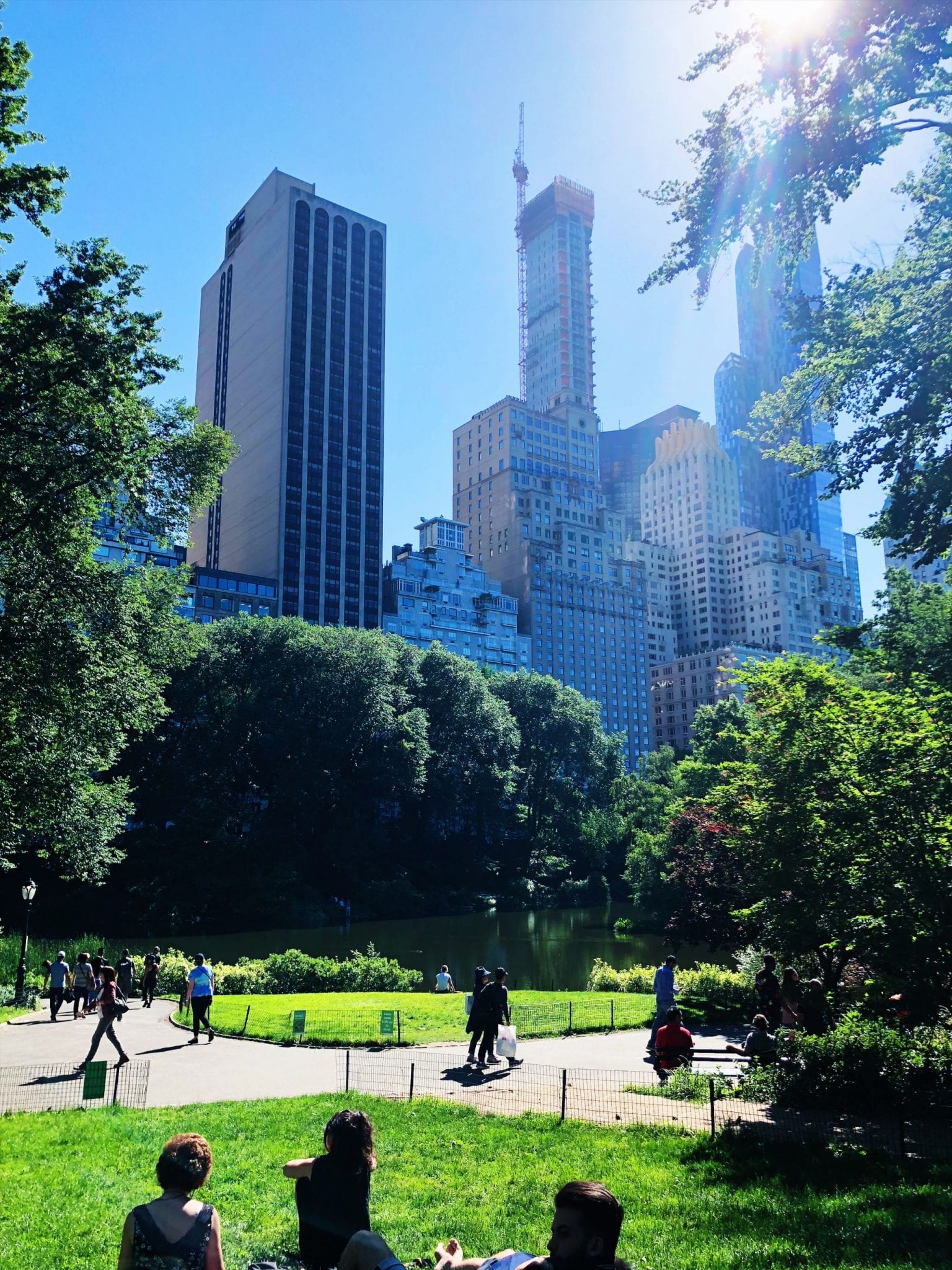 We stayed at the Hilton in Midtown which is very much a conference and business hotel. It was roomy and central to everything, so I would definitely recommend it for that reason, but, it’s a very busy hotel in the business district. There were three conferences going at once, along with a huge high school excursion. Needless to say, the lobby and elevators were at full capacity. Last time we where in New York we got a great price at the Soho Grand Hotel. That hotel was stunning and very elegantly modern, had great ambiance, and I really loved staying in Soho. The room was tiny though and we had to take the train out to a lot of sightseeing highlights. There was a lot of shopping in Soho but not as many restaurants or coffee options as there are in Midtown, and everything closes down around 6 or 7, whereas Midtown seems to never sleep.   I think I’d stay at the Hilton again for convenience sake. We were a few blocks away from Central Park, a few blocks away from 5th Ave, Madison Ave and Rockefeller Center and we had tons and tons of restaurant options all around us in varying price points. I found out on the last day that we were very close to Bryant Park and I wish I’d spent more time there. I really liked that our hotel had a Blue Mercury store in the lobby. I enjoyed browsing cosmetics while waiting for my husband to meet back up with me.

Our Flight, Day 1, Dinner in Soho

Our first day we arrived at 7 am after taking the redeye Cathay Pacific flight to JFK. I had NO idea JFK was that far out of the city but the cab ride took an hour and a half thanks to commuter traffic congestion. Our flight left at 10:30 pm the night before so we were jet-lagged and tired but my husband was limited on sightseeing time so we had a one hour nap and then got on with the day. We strolled around Midtown, ate lunch at one of the restaurants at Rockefeller Center, and then eventually we made our way to Soho. I really enjoyed checking out the new Alo Yoga flagship store in Soho. I posted those photos on my Instagram here. We had our anniversary dinner at Balthazar’s in Soho which I really wanted to try out last time, but it was so busy we couldn’t get in. This time it was also very busy but we somehow managed to get squeezed in. 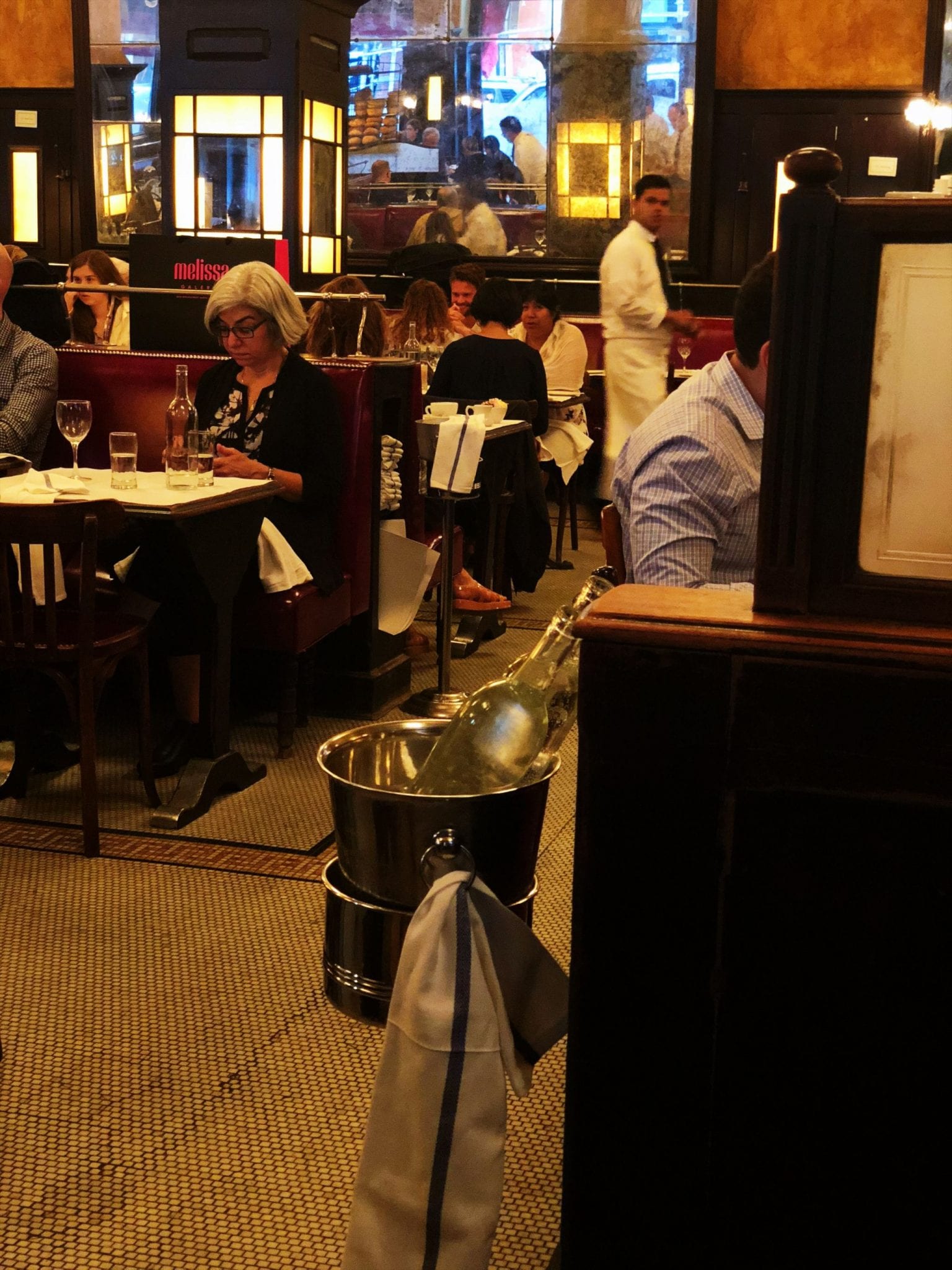 St. Patrick’s Cathedral on 5th Avenue is definitely a site to see amongst all the shopping. I’ve been in many famous European Cathedrals and this one is just as beautiful and grand inside and out. There is a constant flow of tourists and worshipers at all hours of the day, right up until the late evening. It was also a great spot to sit and drink a coffee on the steps and people watch when we were tired from walking. It was grad weekend so we saw many, many venues throughout the city hosting grad ceremonies which is what the crowd is in this picture. 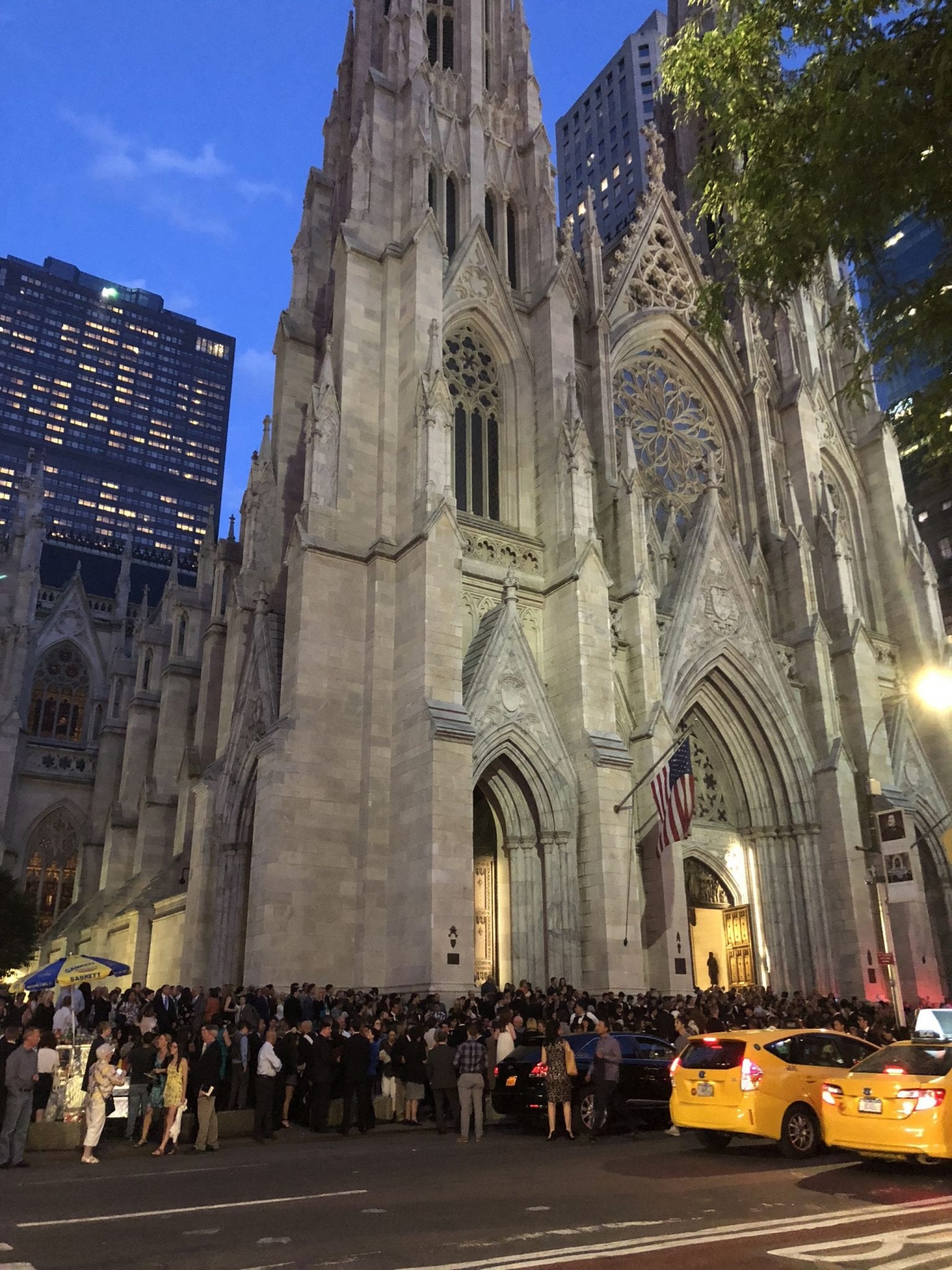 The Lululemon store on 5th Avenue.

Heavenly Bodies: Fashion and the Catholic Imagination exhibit at the Metropolitan Museum

A huge highlight for me was visiting my oldest friend who recently moved to New York and seeing the Heavenly Bodies: Fashion and the Catholic Imagination exhibit at the Metropolitan Museum with her. We had such a fantastic day taking the subway, walking through Central Park looking for the museum and then after the museum we decided to take the train back to midtown and check out the Downton Abbey exhibit. The Heavenly Bodies exhibit though is phenomenal and I highly recommend it. If you went to Catholic school, or went to a Catholic church (and you were as terrorized as you were fascinated by the movie The Exorcist like I was), the imagery of this show is just so intense, and beautiful. It’s not that the exhibit is scary or intends to mirror that movie at all at all but there is a definite ambiance with the music and the lighting, and some of the costumes looked very familiar to the movie. I took copious amounts of Art History classes in college so the imagery was very strong for me.

The Highline and Chelsea Market

The Highline in the Meatpacking district and the Chelsea Market is another area to check out. It’s a nice stroll on a sunny day. 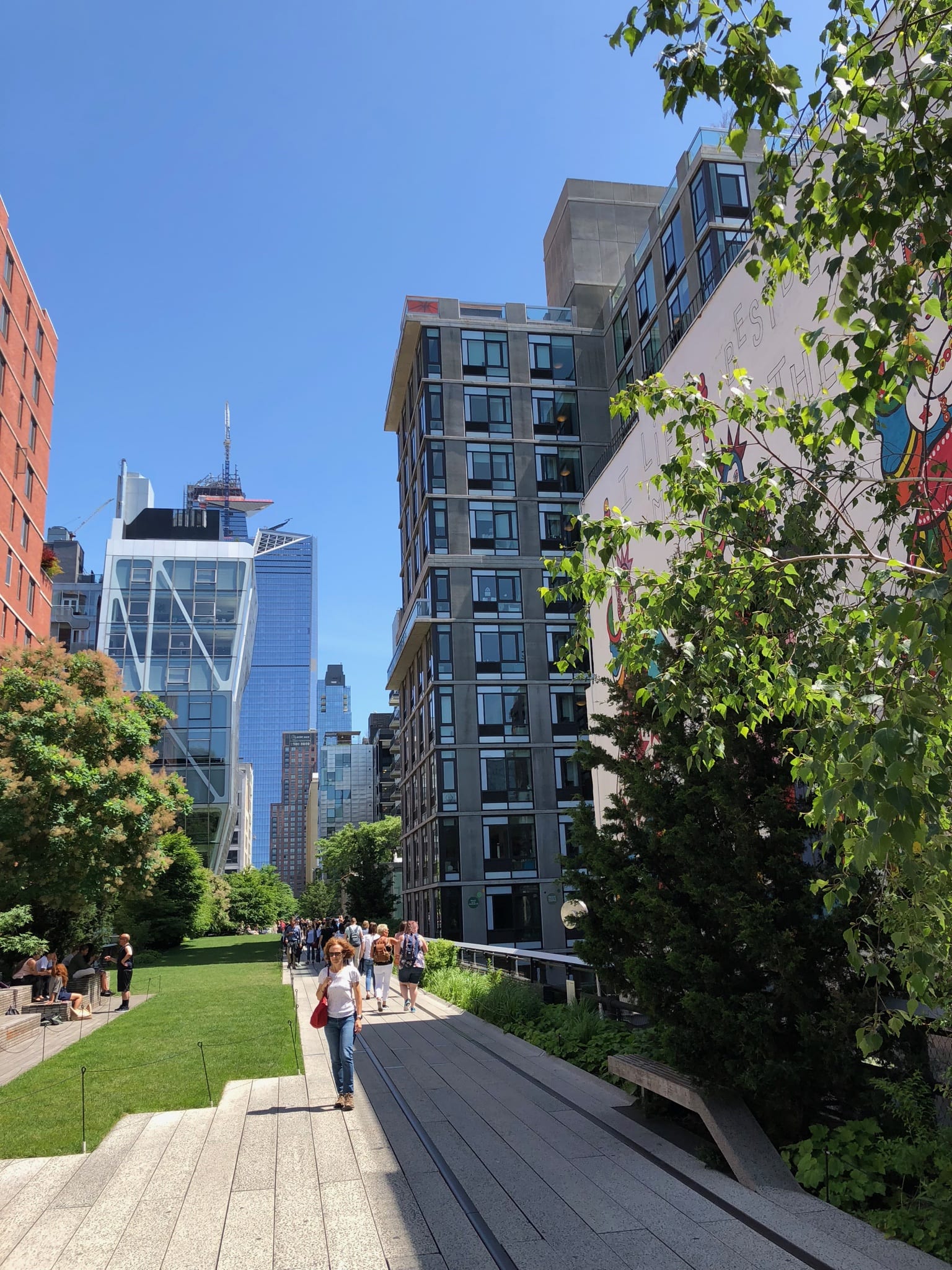 This beautiful park was a big highlight for me and an accidental find. We walked about 10 miles on this day and stumbled upon Bryant Park as we meandered back towards Midtown.  We later realized it was very close to our hotel. We watched an amazing ballet show and sat and people watched, and then we walked around to the front were the New York Public Library is situated. The park itself has a huge grassy field, a stage, coffee shops, restaurants and bar, a carousel and a shady tree-lined stroll. This seemed to be a popular work lunch spot and after work hangout, so it’s a perfect spot to spend a few hours.

This is essential New York Ghostbusters sightseeing. The Library does not disappoint.

We had several great meals so I wanted to share a few. The Wayfarer was really great for both breakfast and dinner. It was a block away from our hotel so we did end up hitting this restaurant up for two meals during the week.

Balthazar’s is in Soho and where we went for our Anniversary dinner. It’s a really great and well-loved French bistro and it’s always packed.

I think my favorite meal though was a much humbler one at Pazza Notte. This was also close to our hotel and it was constantly overflowing with dinners and was very lively. I realized later that that was due to the delicious pizza plus the two for one martini happy hour so this was a very popular post-work drinks place. The restaurant is really big with many tables, and the entire front of the restaurant was an open patio. Our waitress was fantastic! She handled an ungodly amount of tables, was really sweet and had great recommendations. We tried the martini flavor of the day (from their very extensive martini menu) and it was strong and delicious and went very well with the pizza.

Joe and the Juice is very ‘Instagram’ and youtube vlogger popular and it was right in front of our hotel so I tried it twice. The coffee was good, the smoothie was also good but I didn’t fall in love with the place. I just kind of had bad service both times I went in and it was pretty expensive. I’m not picky about service and I rarely complain but one of the issues I had was they made me the wrong drink after a really long wait for my order, and when I mentioned it they just put that drink back in the blender and added some more ingredients to it rather than making a new one – in the end, it was not what I ordered so It hurt me to pay $10 USD for that smoothie. There seemed to be a ton of smoothie and fresh pressed juice shops in the different neighborhoods so I was not so enchanted by this particular one.

Ground Support in Soho is probably the best coffee I’ve tried in New York and definitely worth looking for if you are exploring around the neighborhood. This was our main coffee shop near our hotel when we were in New York in 2014, so this time around we made sure to look for it again. 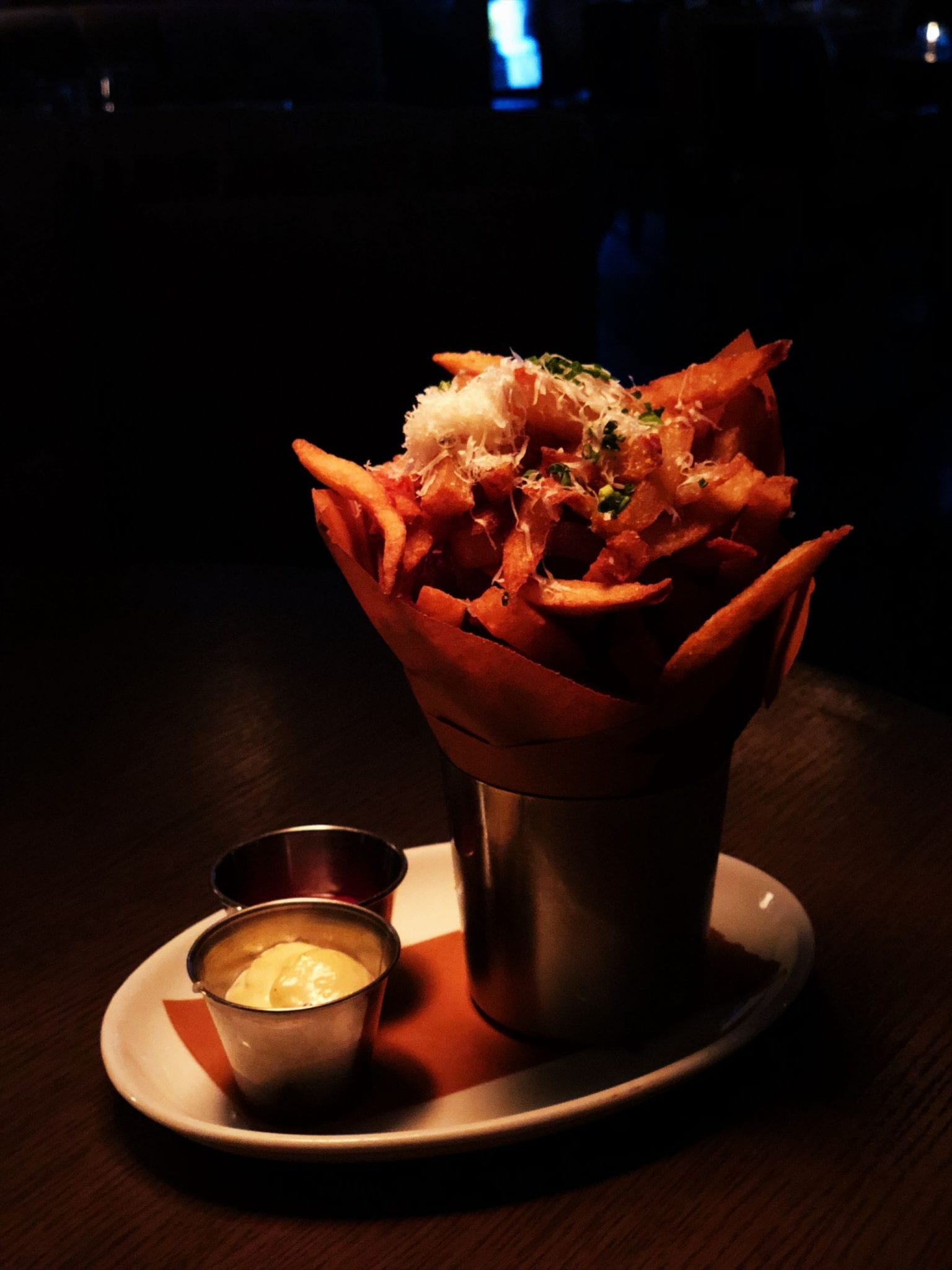 What I Wore On The Flight

What I Purchased In New York

I posted about the dress here (from Gap), and the shoes I got at the huge Bergdorf Goodman designer sale. I price compared shoes with the sale going on down the street at Saks 5th Ave and the Bergdorf sale was surprisingly better (for such a swanky and intimidating store). The shoes were on clearance and since I love espadrilles I decided to snatch them up since the clearance price was in line with high street prices. I did ogle some Malone Soulier pumps that were stunning, but out of my comfortable price range.  Lots of Louboutins on sale there, and Manolo Blahniks and Valentinos.

There was so much more I saw and did this trip that I wish I could fit in this post, but these are the main highlights. I really hope I can go back there next year.

#Girltalk I Tried Sugaring Brazilian On My Bikini Area