Bra shopping is a pain, isn’t it? I’ve felt zero excitement over bra shopping and always just went to Victoria Secret, found the molded cup tee shirt bra section and found the size cup my breasts filled with a band that felt comfortable and not pinch and I’d buy it in nude and black. Sometimes I felt sassy and got one with a bow on it or trimmed in lace.  I’d say bra shopping is as bad as jean shopping or bathing suit shopping but those two things are just demoralizing and bra shopping is simply a nuisance or chore purchase and kind of pointless for us little breasted folks. Slipping bra straps is just a thing everybody puts up with all the time, isn’t it? I’m small in the bust so I’ve never felt back pain or the lack of ‘support’ or sagging so I really had no clue that my bra size was wrong and actually not providing me with any support at all. I also thought that because I could never really fill a cup properly (too big for an A, not filling a B completely) that I needed a moulded padded bra to provide me with shape. I was sized a few times before at La Senza and Victoria Secret and they always put me in a 36 band with either a B cup or a C cup so I was pretty confident that I was in approximately the right size and that bras just suck.

Last week I happened to be in Nordstrom bra browsing since my current bra was slipping off my shoulders to the point I safety pinned the straps to the inside of a dress for a wedding – so of course I thought I’d find something similar to replace it with there. The department manager offered me a Nordstrom Bra Fitting and luckily for me she was persistent and convinced me I needed a fitting. I didn’t have time that day but she told me I was probably not a 36B (what I had grabbed off the rack) and by vision she could tell I was more likely a D cup. I thought she was crazy so I left but I came back a few days later with more time and gave in to a proper fitting.  The manager told me that they actually do a 30 day training course in fittings and are trained by representatives of all the brands they carry since different bra brands (French brands vs. American) have different sizing scales.

The fitting took about 25 minutes and consisted of the fitter measuring me over my bra with her standing behind me. Once she decided on my band size (smaller than I expected) taking three sets of measurements with my inhaling, exhaling and relaxed standings she brought a variety of bras in that band size in a few different cup sizes. C, D and DD and a variety of different styled bras and variety of brands. I really thought she was insane when she brought me this bra  in a 34DD which is the style bra she starts off all fittings with. It was bigger than my head! She had me pull my top down (facing the wall with her behind me) and she passed me the bra over my head to put on and she hooked the back and adjusted the straps. And oh my god my breasts filled that DD bra and it felt snug around my ribs and my breasts where lifted.  I looked in the mirror and I was shocked that I looked more proportional in this new size with a nicer profile silhouette and higher breast. It turns out the reason the DD size is the right cup size for me is that I actually have large breast but they are shallow (not projected) and tissue goes all the way up to my collar bone and under my armpits. Some breasts have a very narrow base and project but I have a very wide base. This means that I need to find a specific cup style that doesn’t cut me off too low causing quad boob and that the cups are wide enough to scoop me up in the underarm area. Having the right band size (snug!) is what gives you 80% of your support and creates lift. Another thing to look for is seaming in the cups which provides you with the remaining lifting and shaping. My b cup bra was not working for me because it was resting on top of all of that tissue and not scooping up and supporting me at the band, and the band was so loose that the straps would move around and loosen themselves up constantly. A really great resource for you for deciding breast shape vs. bra style is this Reddit group called A Bra That Fits. If you aren’t near Nordstrom or a lingerie boutique that specializes in fitting (please not a fast fashion mall lingerie store – they notoriously size you in too loose a band in order to funnel the most shoppers into a smaller range of sizes), do check out this reddit for information on how to measure yourself and how to assess your size. My bra fitter brought me a ton of other styles to try on and she gave me feedback on each one. Why they worked for my shape, why they didn’t and what we needed to look for in the next bra. There where a few bras that I loved because of styling but she showed my why they weren’t working for me. This is something I hugely appreciate as she could have easily gone for the sale with those styles but she wanted me to see what a great fitting bra was vs. something that was just ok but beautifully made.

Another style of bra that she had my try on that is ideal for my shape was a soft cup lace bra with no padding and in a demi cup (half cup) style. This Chantelle Opera Demi Bra in a 34D (not a DD as it is a French brand and sized different). This was the revolutionary try on for me because never in a million years would I have known that a soft cup ‘sexy’ bra could give me shape and lift without relying on foam molding. I know you A and B cup girls know exactly what I’m talking about! I love this style for summer because it is very breathable and cool. I also love that it has vertical seams which as I mentioned above, give great lift and shape. And lets face it, a lacey pretty bra make it exciting to go bra shopping! For modesty you can add some cups or inserts as I do but if you are wearing a thicker tee it’s really not necessary. This was another Chantelle bra that she had me try on that we both agreed looked ideal, but I didn’t purchase.

Since making my new bra purchases, the giant Wacoal Tee Shirt Bra (molded but not padded cups) and my lacey soft cup Chantelle bra, I am really happy and excited about bra shopping. So far neither of these bras have had any strap slippage or even strap movement. The Wacoal especially is very, very supportive and stays put. I initially had really horrible back pain after a full day of wearing my 34D cups and very sore breasts up top around my collar bone but I realize that I’ve gone a lifetime without having any breast support and I also had a lot of breast tissue that has never actually been inside a cup before or lifted up that high. There was a lot of muscle adjusting going on that first day! I was also a bit nervous at first about the mistaken idea that me wearing DD cups was sort of false advertising but that is where a good soft cup bra comes in to remind you that that shape you are seeing is all you, including all that new cleavage that comes with well supported breast.

My old 36B cup heavily padded and molded bra is now in the bottom of a garbage can and I’m very tempted to throw some lighter fluid on it. If you haven’t had a PROPER fitting yet get on it!! You will feel like a million bucks! You will probably spend all your lululemon budget on new bras though. 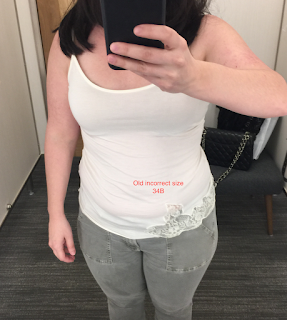 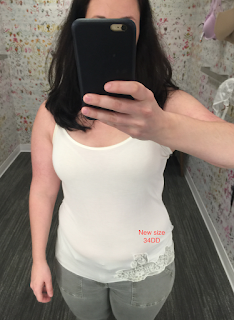 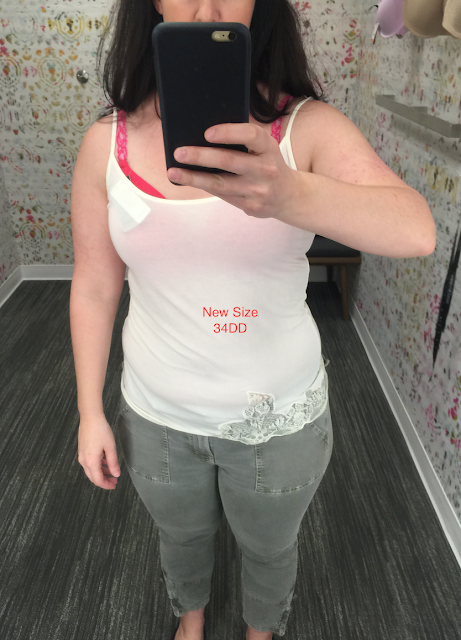 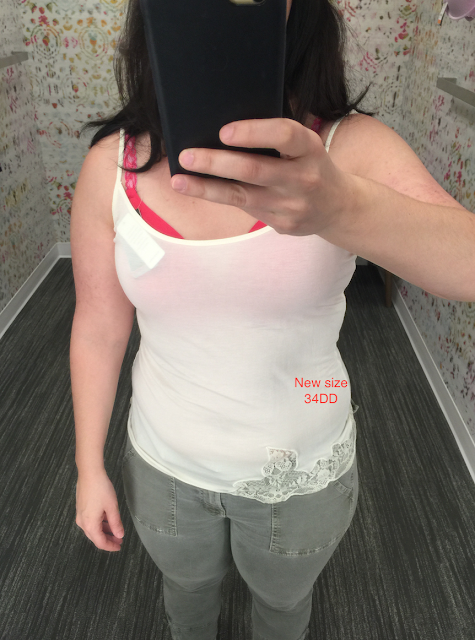 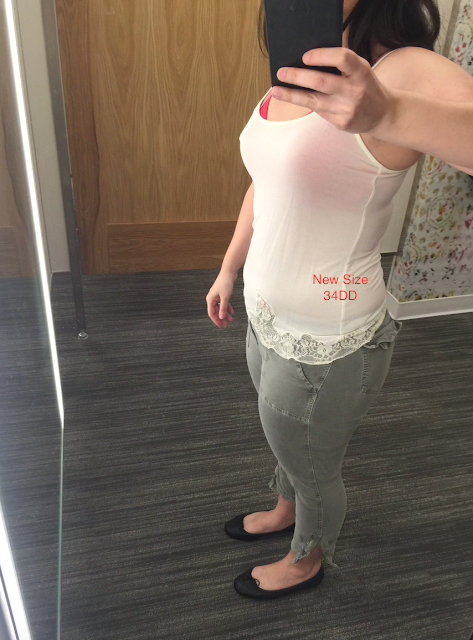 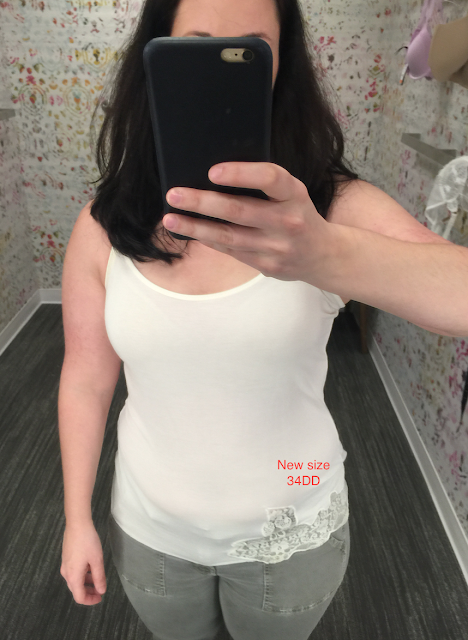 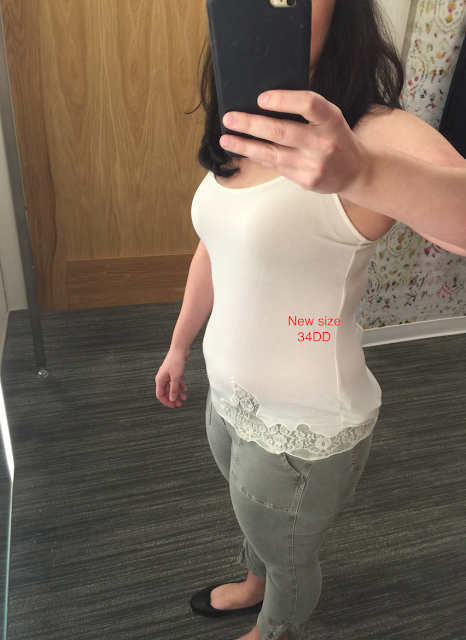 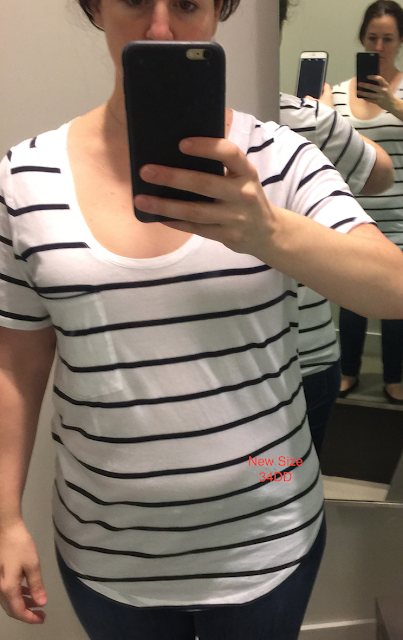