I know the bomber jacket style has been very polarizing on the blog ever since the Non-Stop Bomber Jacket dropped last week. I discovered I really love the bomber jacket style, but in particular I like the flight version, not the varsity version, and I don’t care for embroidery. I was surprised when the Lululemon one arrived at how light weight it is, and very disappointed in the reviews that have popped up online. Honestly it feels pretty flimsy stacked up against a same style from another brand, at the same price point.

Today I decided to try on a few that had caught my eye at Aritzia that where the same price (I tried on a few at a higher price point – $177 and $390) but I really gravitated to this Whitby Bomber, in this cedar rose color called Foulard. As you can see, I tried to quench the lust for this color with the purchase of the matching tee shirt (Valmere T-Shirt). I’ve tried this jacket on 5 times in the past few weeks and have decided to return the Lululemon Non Stop Bomber in favour of this one. 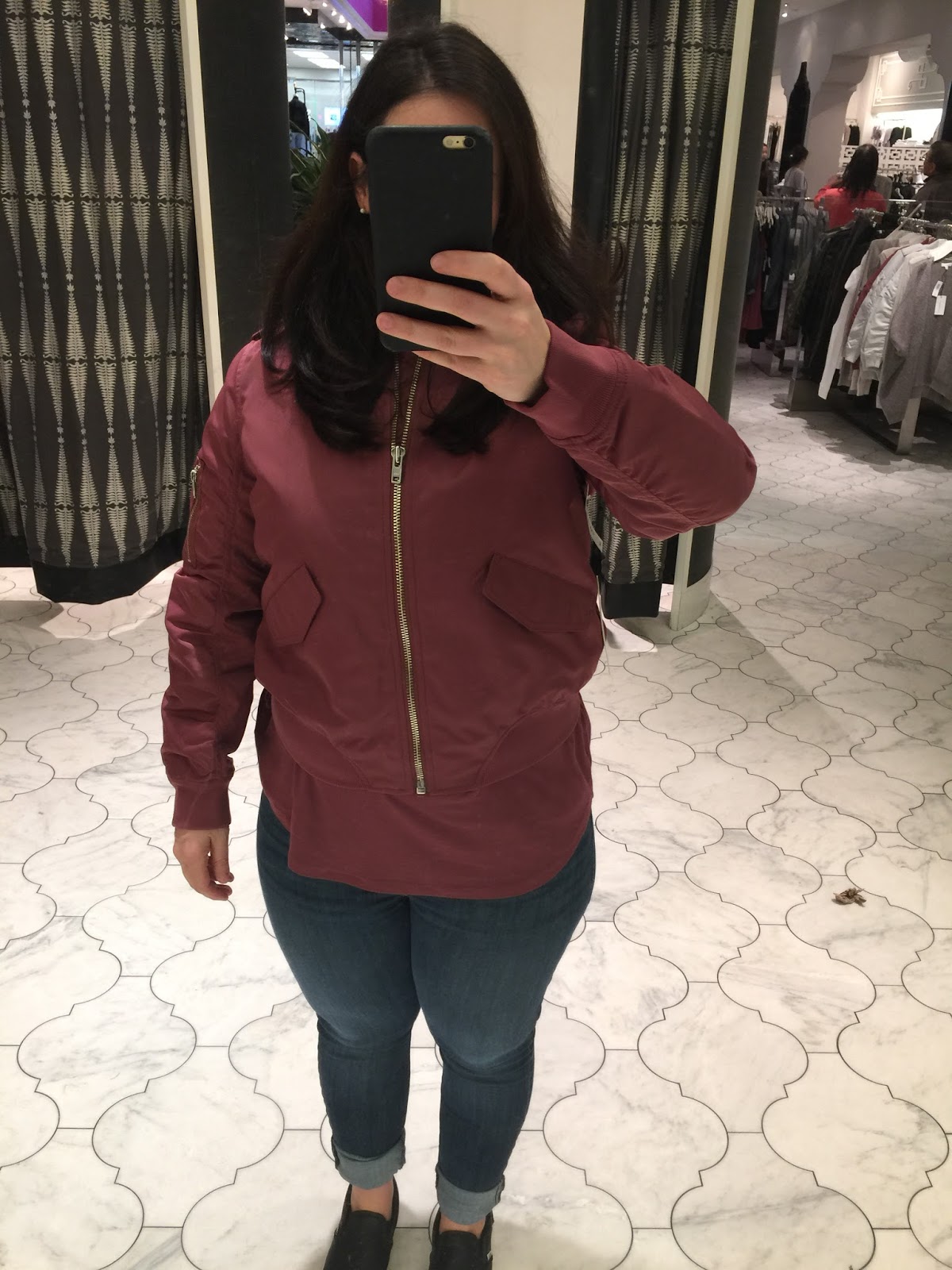 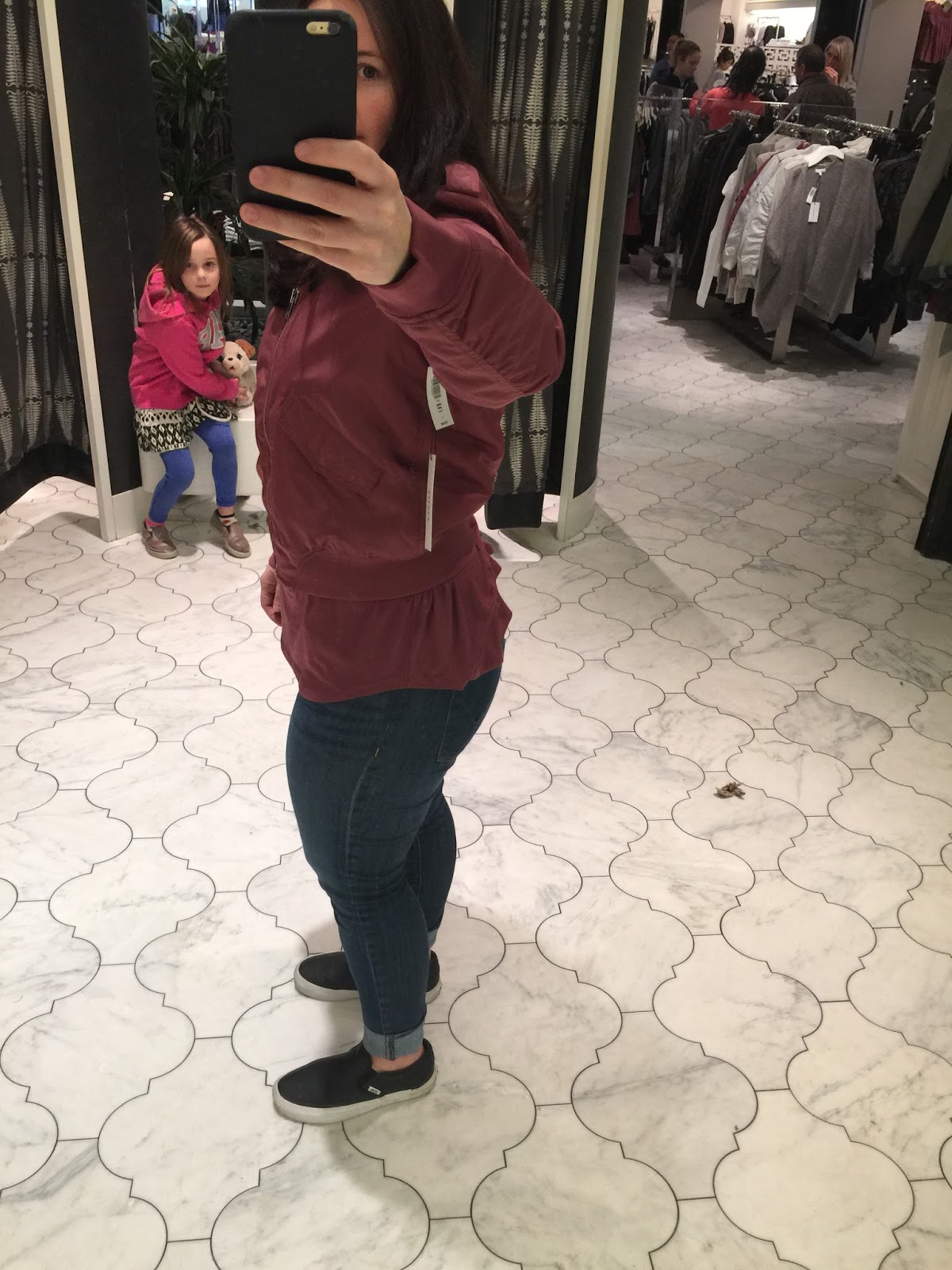 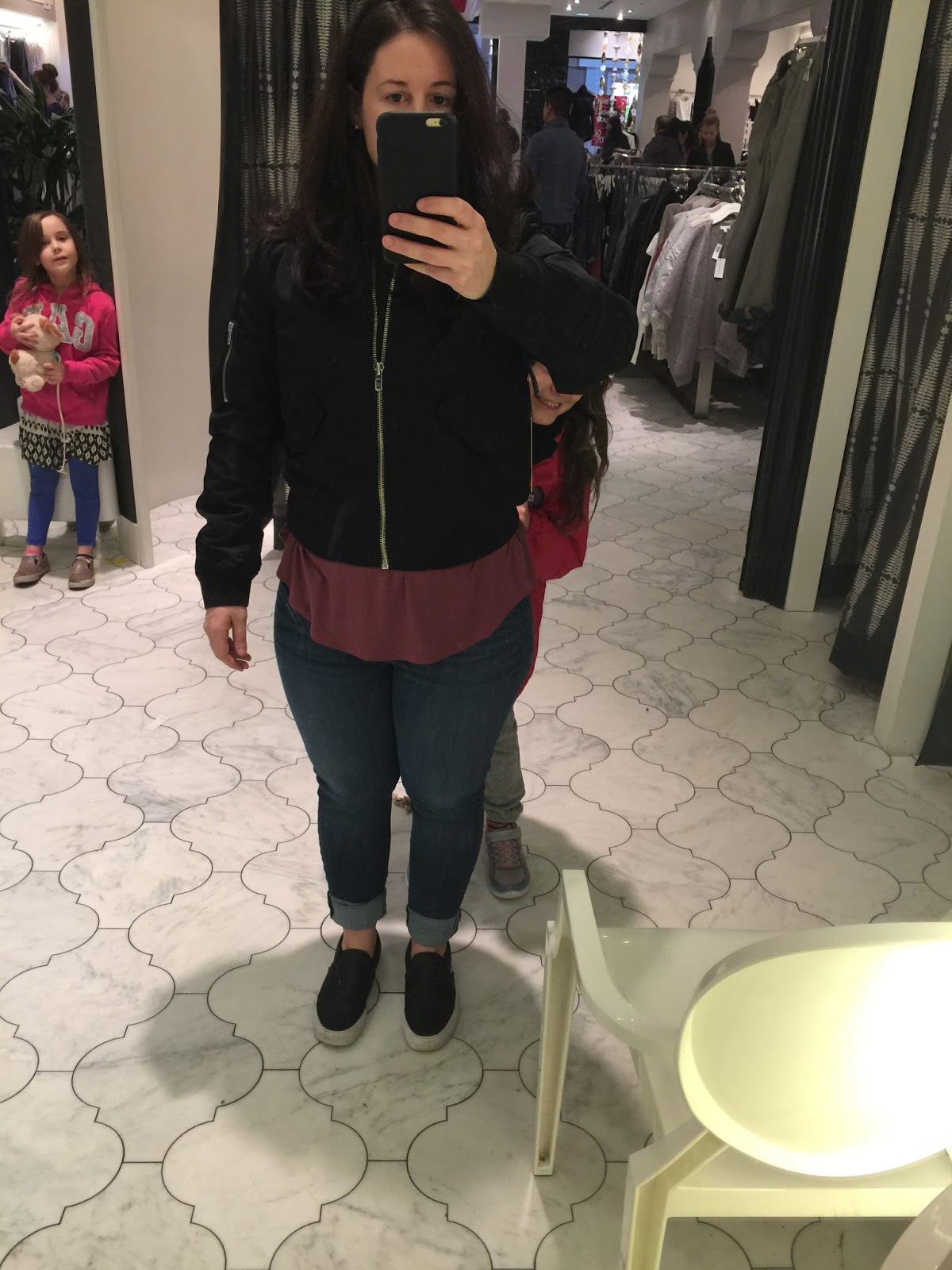 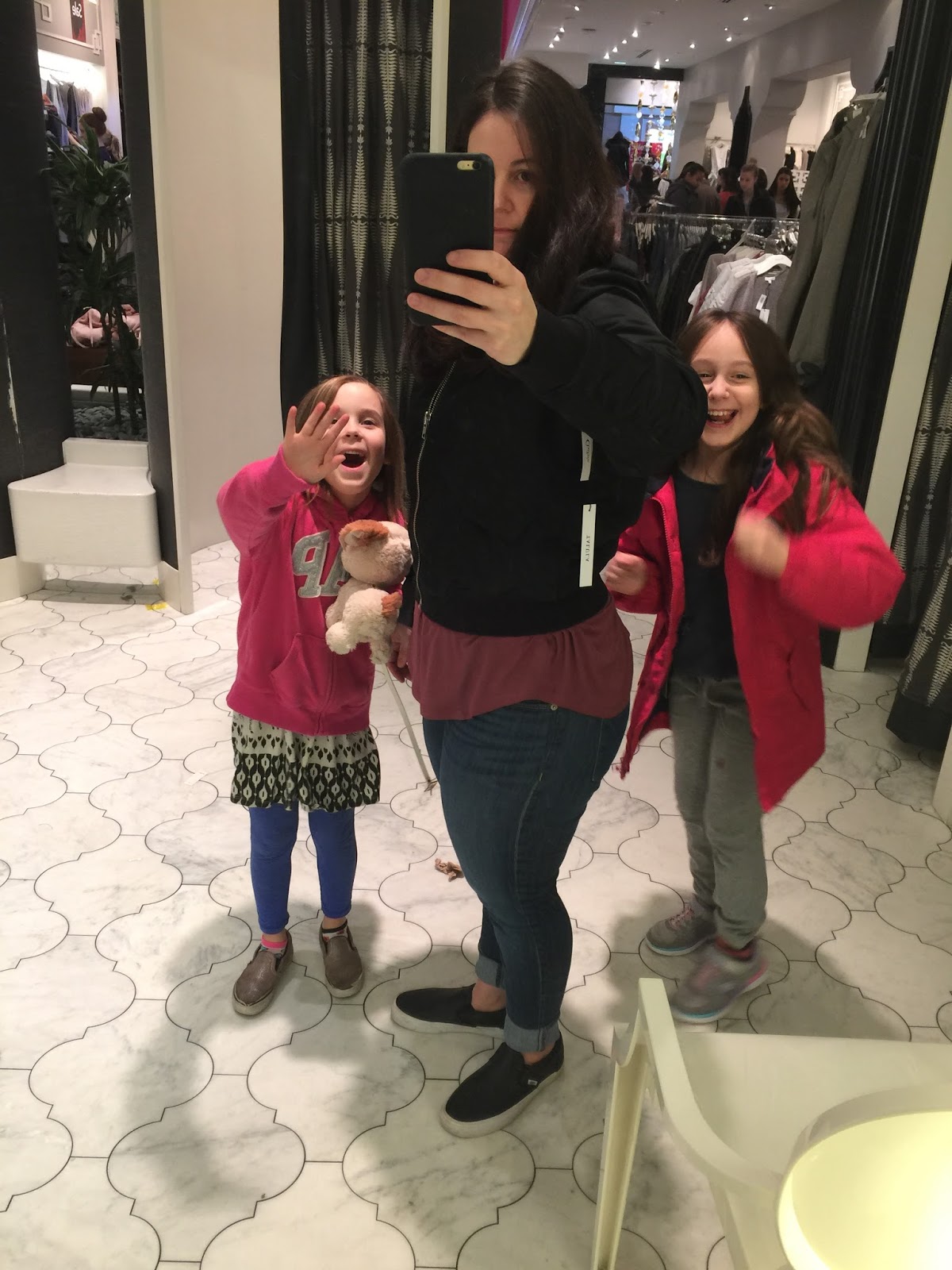 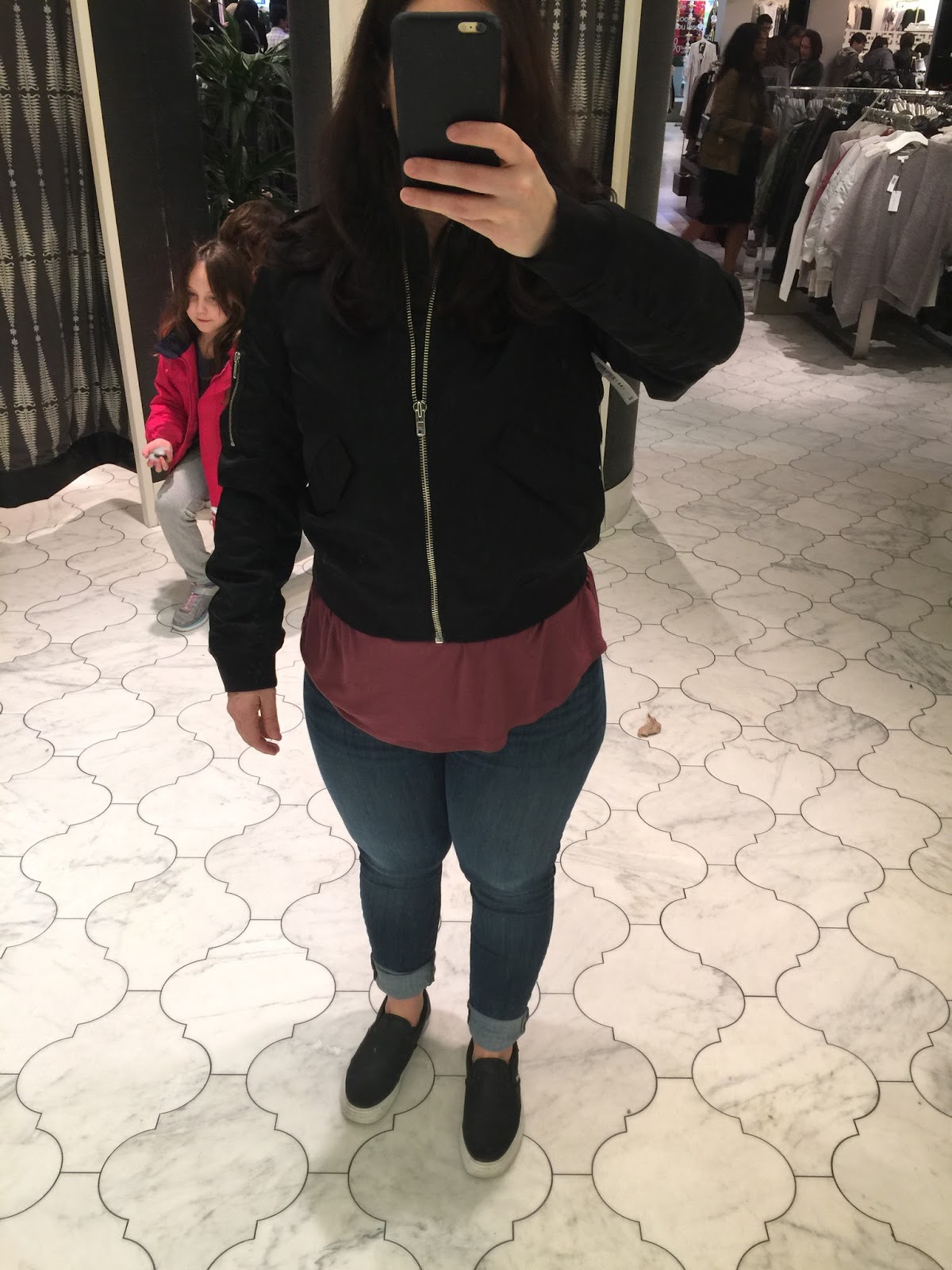 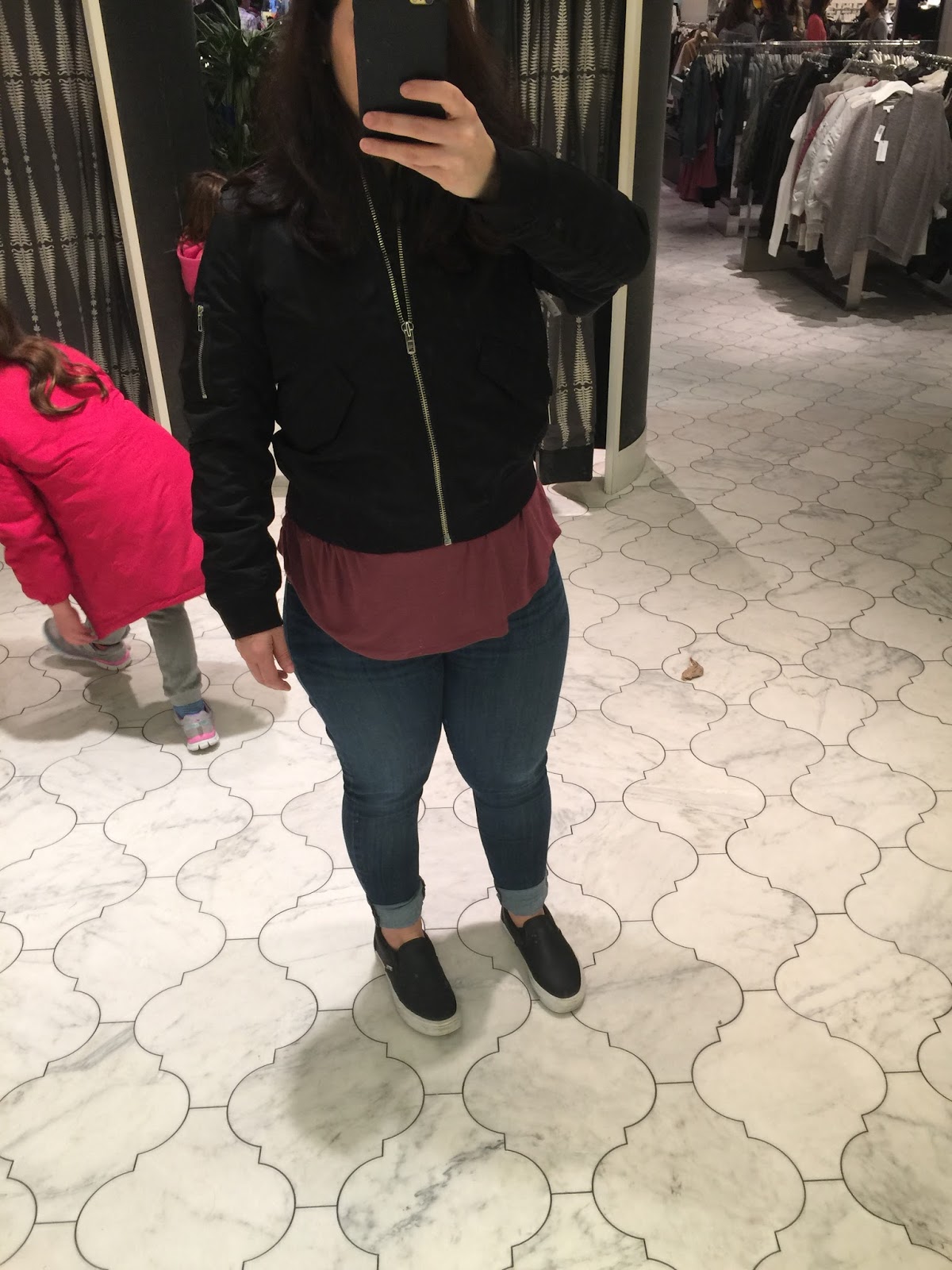 I really was torn between the black and Foulard. The black is really beautiful, elegant and edgy and will go with everything, but the rose color makes me happy and feels like a really nice contrast between a masculine jacket style and an ultra feminine color.

This was another style at Aritzia that I also really liked, This is the Gilman Bomber priced at $174 and it also comes in a pretty soft pink called Venetian. My local store only had this Taupe color. The inside is lined with jersey and it’s significantly lighter weight than the Whitby Bomber, but also less structured. I opted out of this one because it was more expensive. 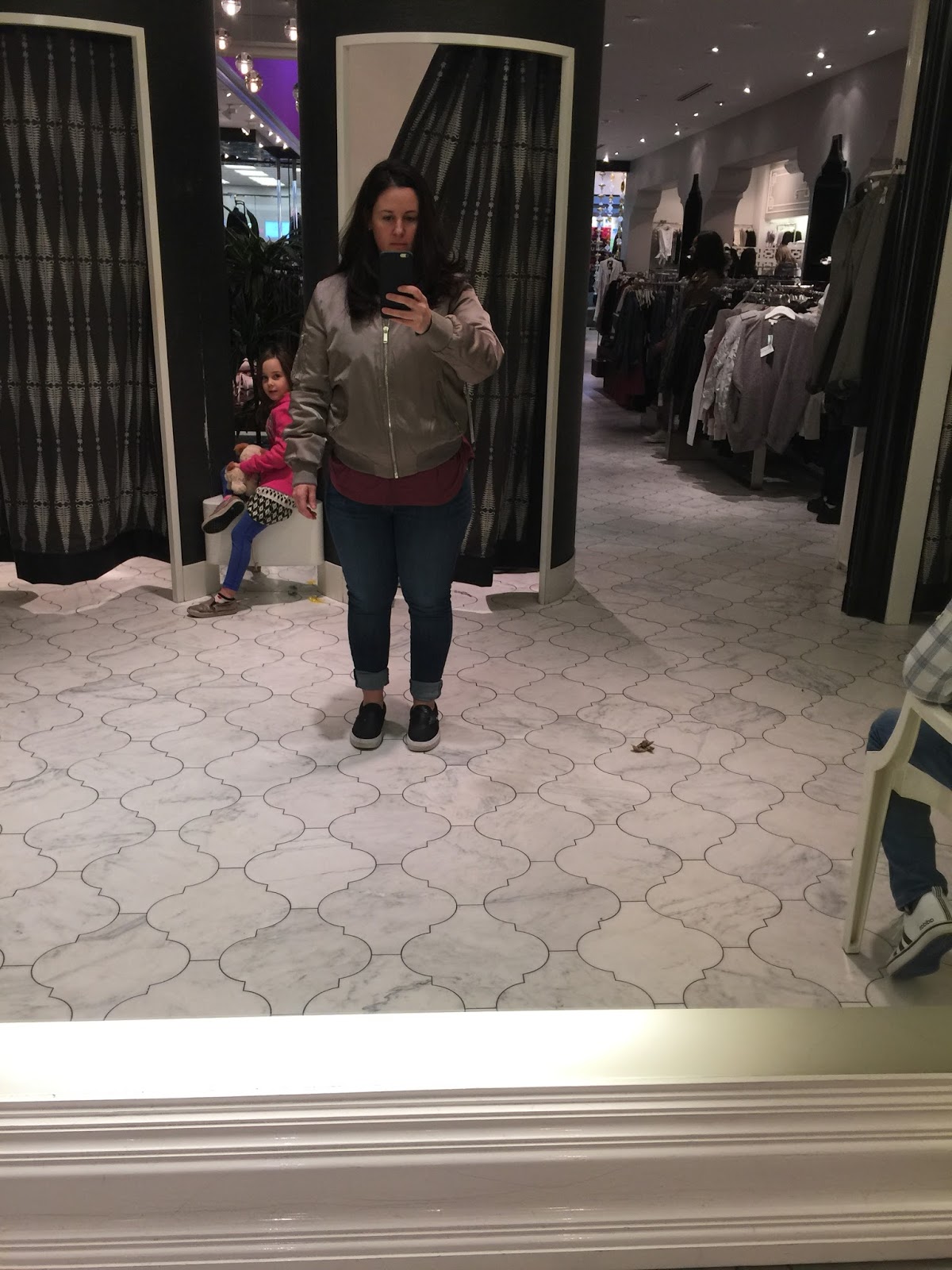 After purchasing the Whitby Bomber I decided to stop in at lululemon to get some fit comparison shots. I really dislike the way the Non Stop Bomber Jacket pockets are on the side of the jacket. This creates a bit of a horizontal poof at the waist. The other bomber jacket styles I tried on all have the pockets either on the front, or closer to the front and angled. I like that the jacket is light and perfect for warmer weather, but as I said above it also feels really delicate and flimsy. I don’t care for the reversed side in the matte textured swift. 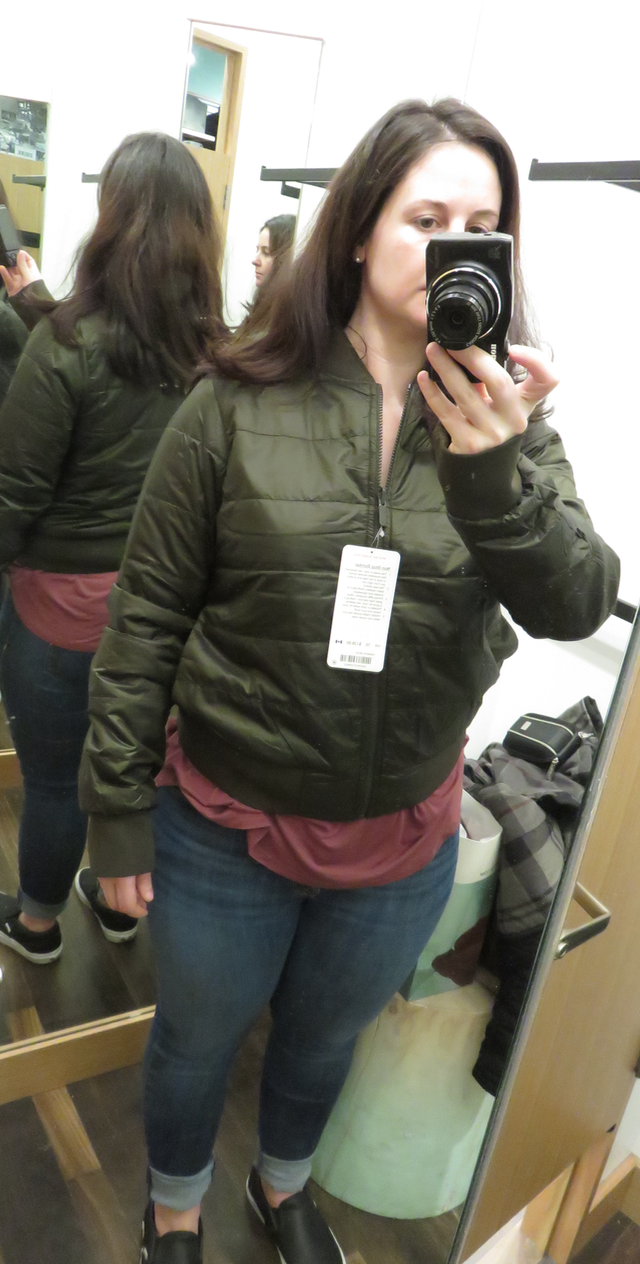 Another thing to note here is that the SA at Aritzia convinced me to go with the medium vs. my regular size L. The M felt comfortable but it’s definitely more cropped. I erred on her suggestion because I’m losing weight (like actively working on it) so I don’t want to have an oversized bomber jacket in 3 months time. I am slightly worried though that I should have stuck with my regular size. I am 100% happy with the color though, and who knows, in a few months time I may break down and buy the black one too! 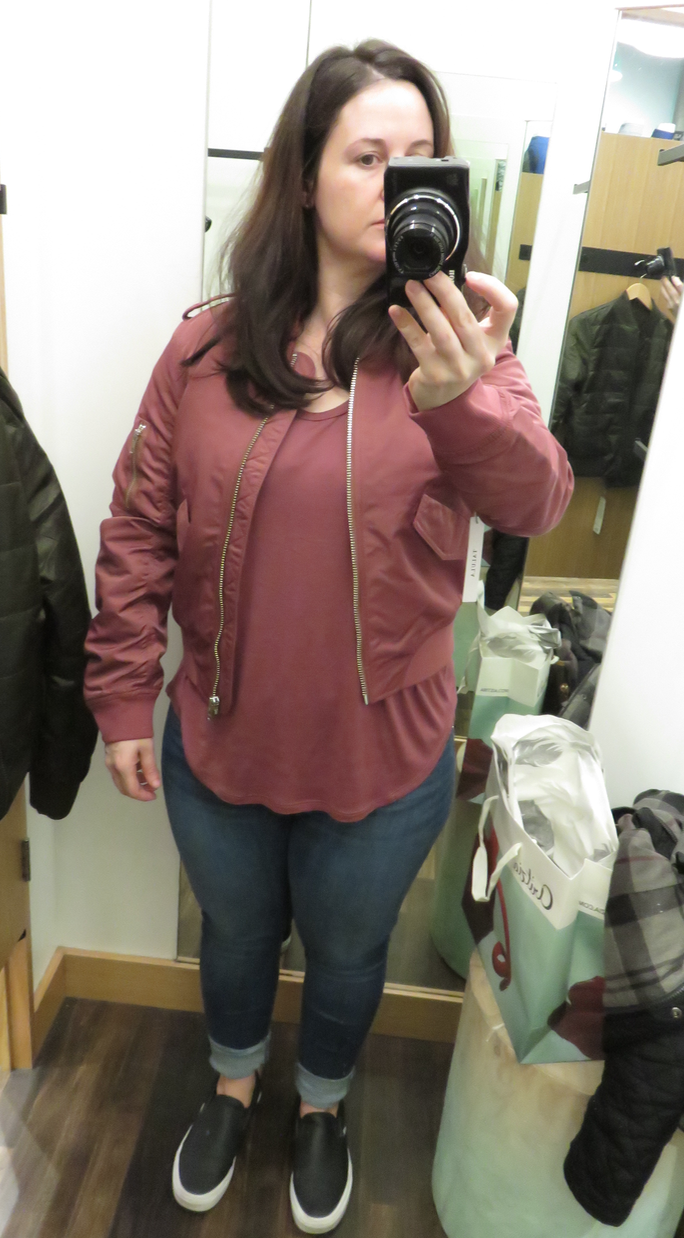 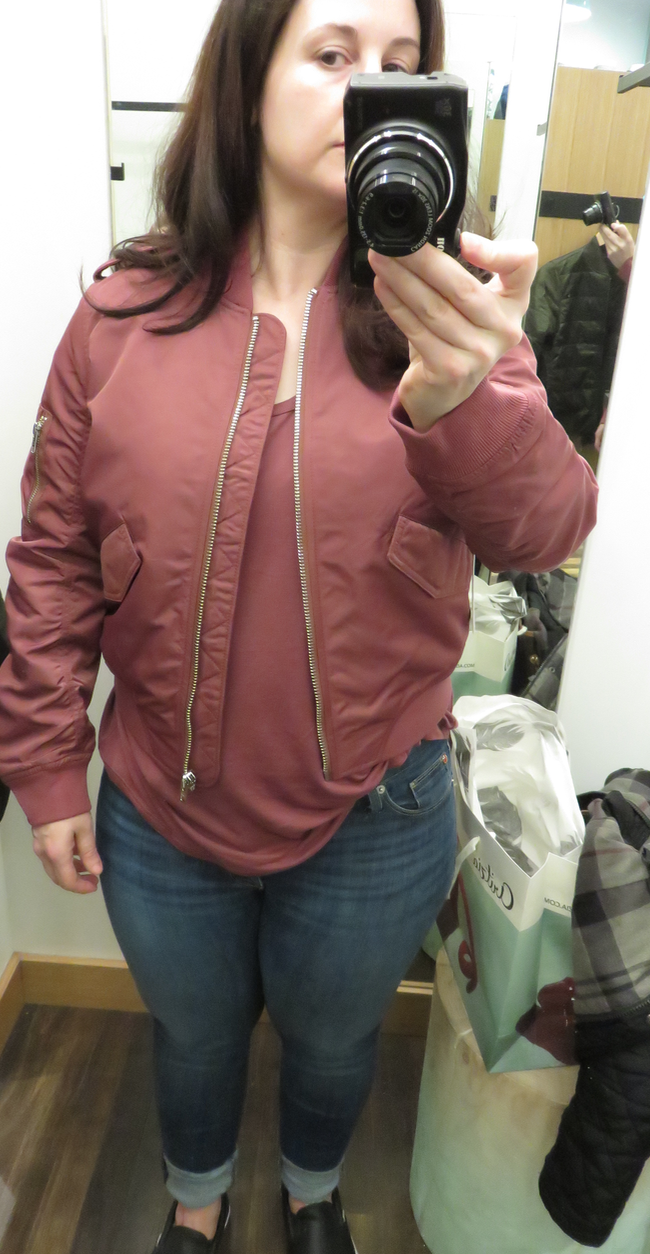 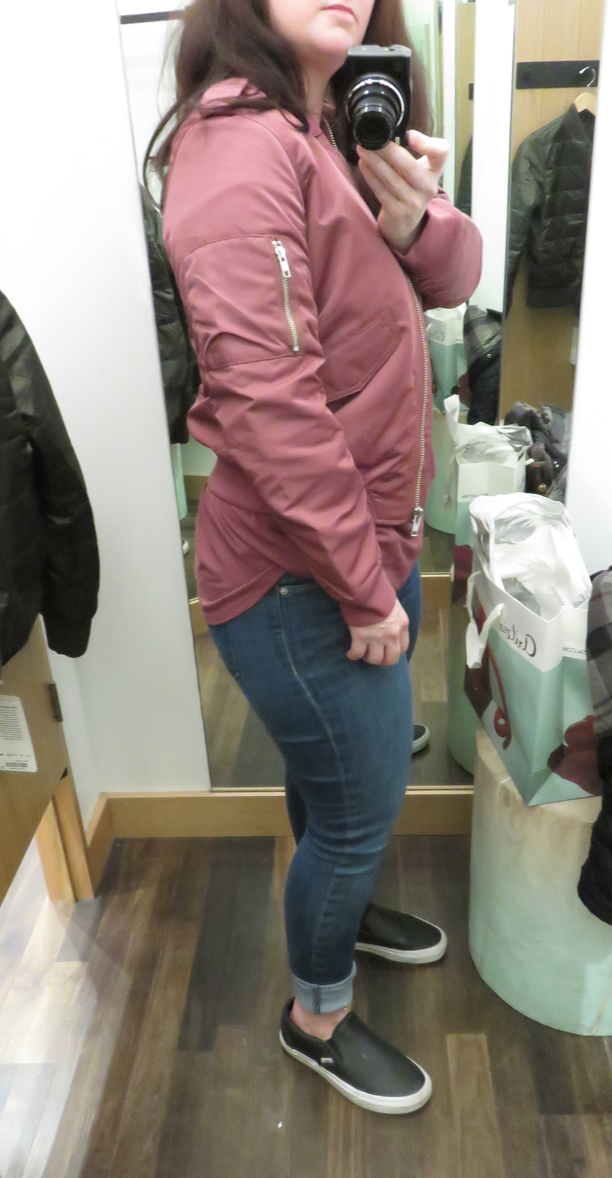 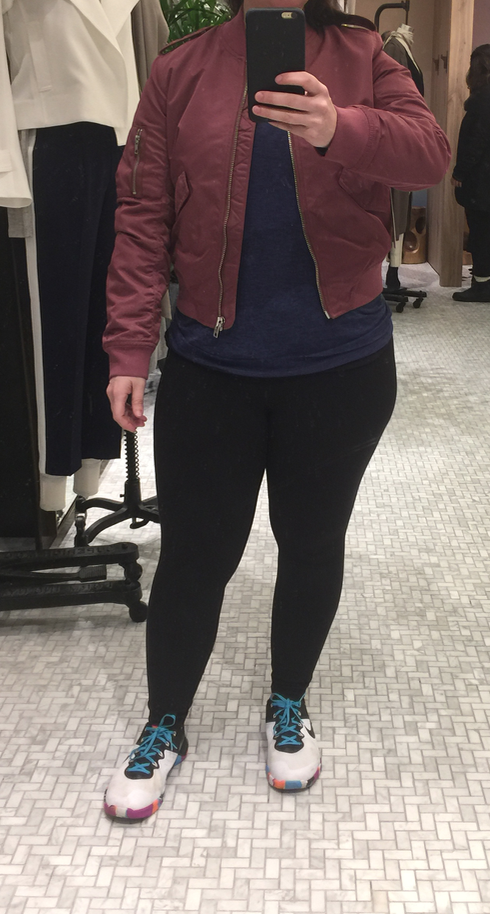