Thanks to Mrs. O for doing such an awesome fit review today of all the pieces we’ve been wondering about from this past upload. I know a lot of you were wondering about the Press Pause Pullover and the Box It Out Jogger specifically, so this is great information for those of us who haven’t seen it in store yet. My store has neither of these two items.

The worst thing just happened by the way. I was just finishing up putting this post together which was about an hour and a half of work, and I was thinking to myself ‘I should probably save this’, and moments later my computer froze on me and then crashed. When my computer restarted, my blog post came back but it was completely empty. I said so many swears. Luckily the second time around it only took me 20 minutes because I already had all the photos saved and labeled. I’m not ready to replace my computer just yet so I’m going to have to get used to saving my work every 5 minutes. 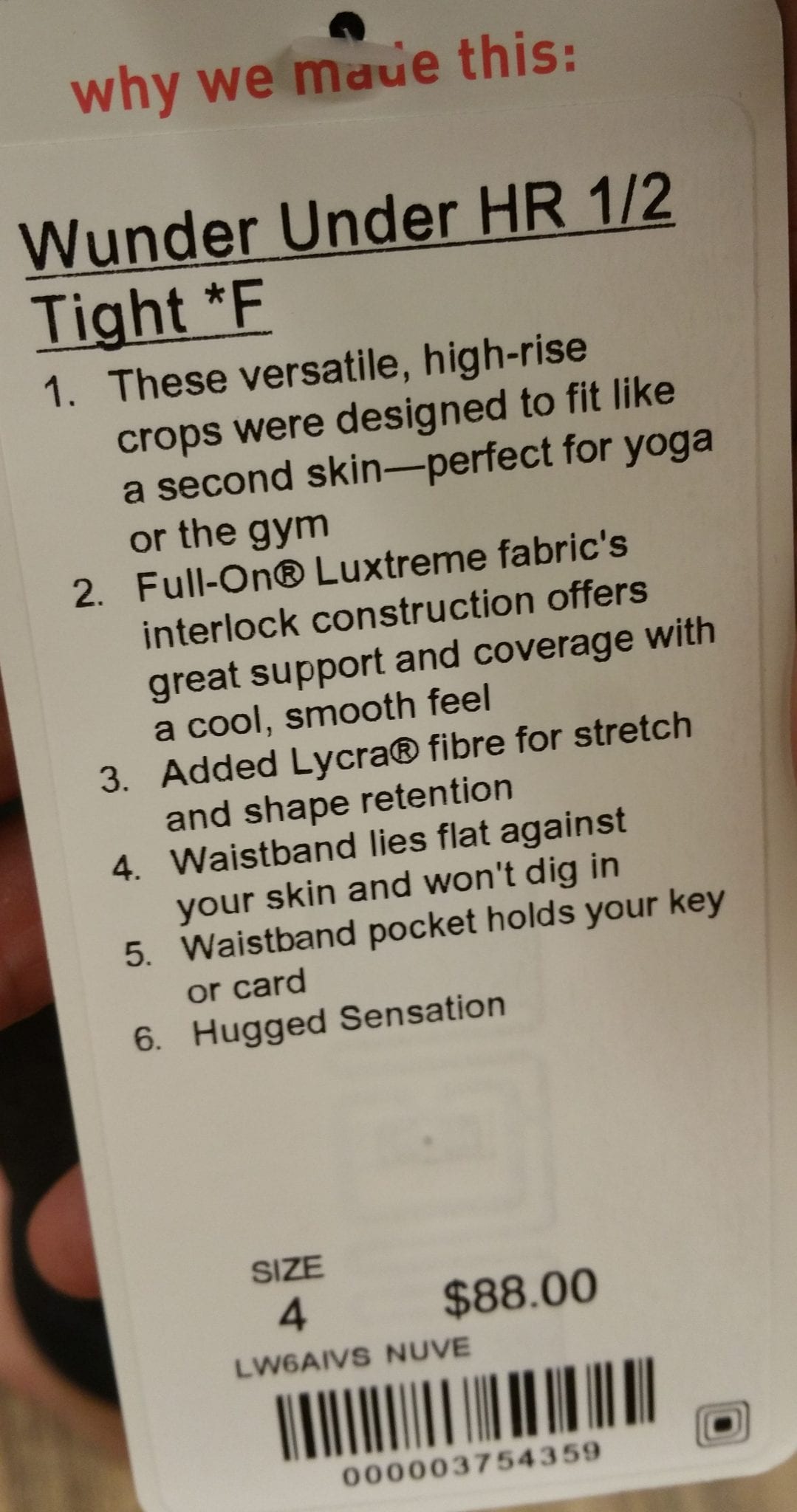 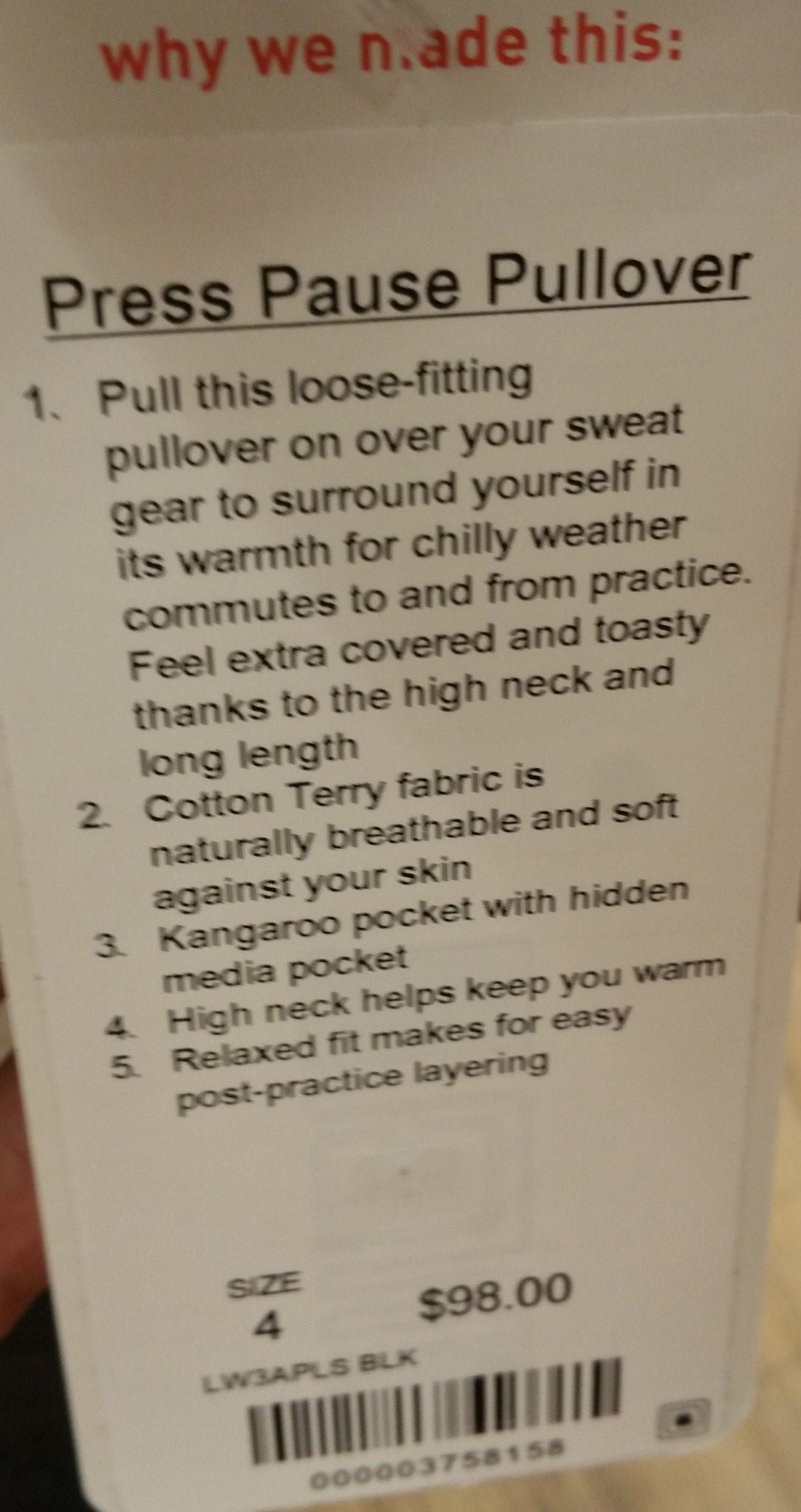 I wanted to check out the fit of the Press Pause Pullover.  Surprisingly, I sized down from my usual pullover size 6.  I tried on what I thought was my TTS but it was too baggy and bunched up in the arms.  Once I tried on a size down, it fit perfectly.  I really liked the slim fit in the torso but there was enough room around the shoulders to make it fairly easy to get off.  I find that LLL’s terry doesn’t have much give in the seams around the shoulder and armpit area like other.  The side seams along the torso is made from a stretchier fabric to give it a relaxed fit.  It was very cozy and warm.  The collar was just high enough to cover the entire neck but not too tall to get in the way.  It also scrunched down and stayed down.  It would probably fold over nicely.  I loved the length because it covered the bum and hit at the right spot on the lower hips.  As much as I liked it, this pullover is not a must have for me.  So, it’s going on my wishlist and I hope if and when it goes to WMTM, my size will be left.
As you know, I have a love hate relationship with floral prints.  I love it on everyone else but hate it on me.  Well, I think I finally found a floral print that I like on me.  I loved that the print was muted (unlike the black and white).  The pattern was printed on a light blue background.  It was fully opaque and TTS.  I liked that it came in a 1/2 tight; I tend to favor patterns in a crop tight.  I splurged and took it home with me.

I finally found a local store that got the Noir Pant and the Amalfi Blue Swiftly.  (As timing would have it, my order also got delivered today).  Cristina was right.  The Amalfi blue swiftly is so vibrant and the color is very saturated.  I couldn’t resist!  The teal green is equally as vibrant.  I’m a blue person so I got the blue.
I was really excited to try on the Noir Pant.  I’ve been hoping to find a dressier pant from LLL.  (Why do the men get dressier styles?)  It is such a nice lightweight pant made of swift fabric.  I tried on my TTS and a size up.  The size up was too big in the legs (especially since it’s already a wide legged pant).  The only thing about my TTS was the waistband.  There’s not as much elastic on the sides so it was a bit snug getting them over my hips because there’s not enough give in it.  But it also could have been because it was so hot and I was sticky.  Once on, the waistband fits perfectly.  As I expected, these pants will definitely have to be hemmed.  I think these pants would look better with a cropped top or a top tucked in because they are very high waisted.  I’m not sure if the high waist will flatten my bum out.  I didn’t inspect it enough to tell if it did.  I’m going to try on the ones I received and ask my hubby what he thinks.  I think I will definitely be keeping one pair.  The question is what color.  Most likely the black pair. 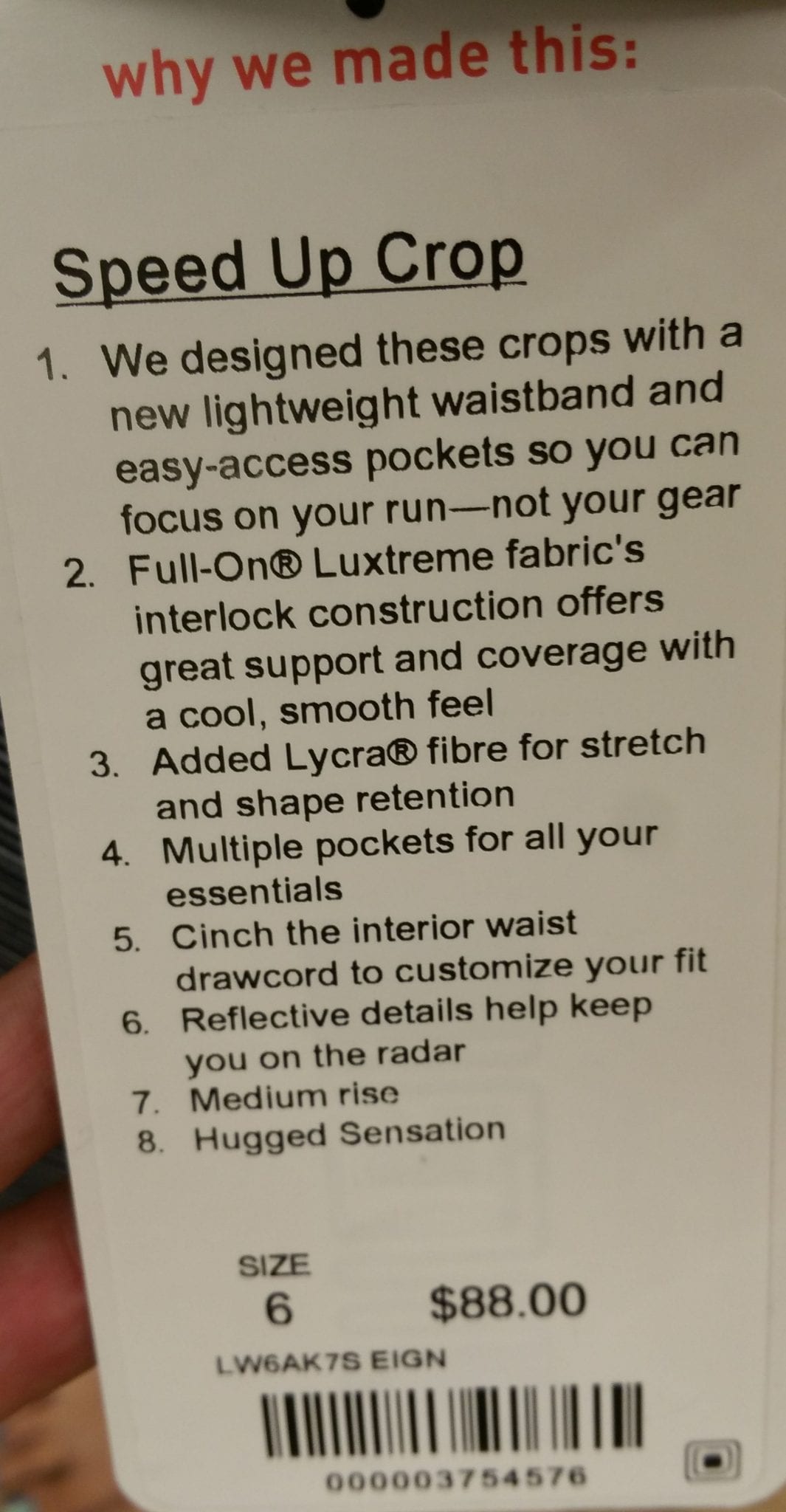 I know Cristina already did a fit review on these crops but I wanted to check them out for myself.  Mainly because I like the pattern.  Also, many of you were commenting on the fit of the new Speed Up Crop/Tight so I thought I would give them a second try.  Like many of you described, the Speed Up Crop is a much tighter fit than the Speed Tight.  It was really hard for me to pull them up in my TTS.  When I finally got them up, it was still a bit snug in the waist.  I was told that the speed ups are not double paneled in the back because they are a run tight.  So, I was worried it might be a little sheer.  I felt that in my TTS, the pattern faded a bit.  Surprisingly, I found them to be a 9/10 in opaqueness.  The pattern is printed on a light blue background.  Because the waistband was bothering me, I tried on a size up.  It was still difficult getting them over my hips (just slightly easier).  Once I sized up, the waist was comfortable for me and didn’t dig in.  I also thought the pattern looked richer because there was no fading at all.  I did like the denim-y color of the crop.  But because I got the blue floral print, I left these behind.  I’m also unsure if I like the way the speed up crop fits. 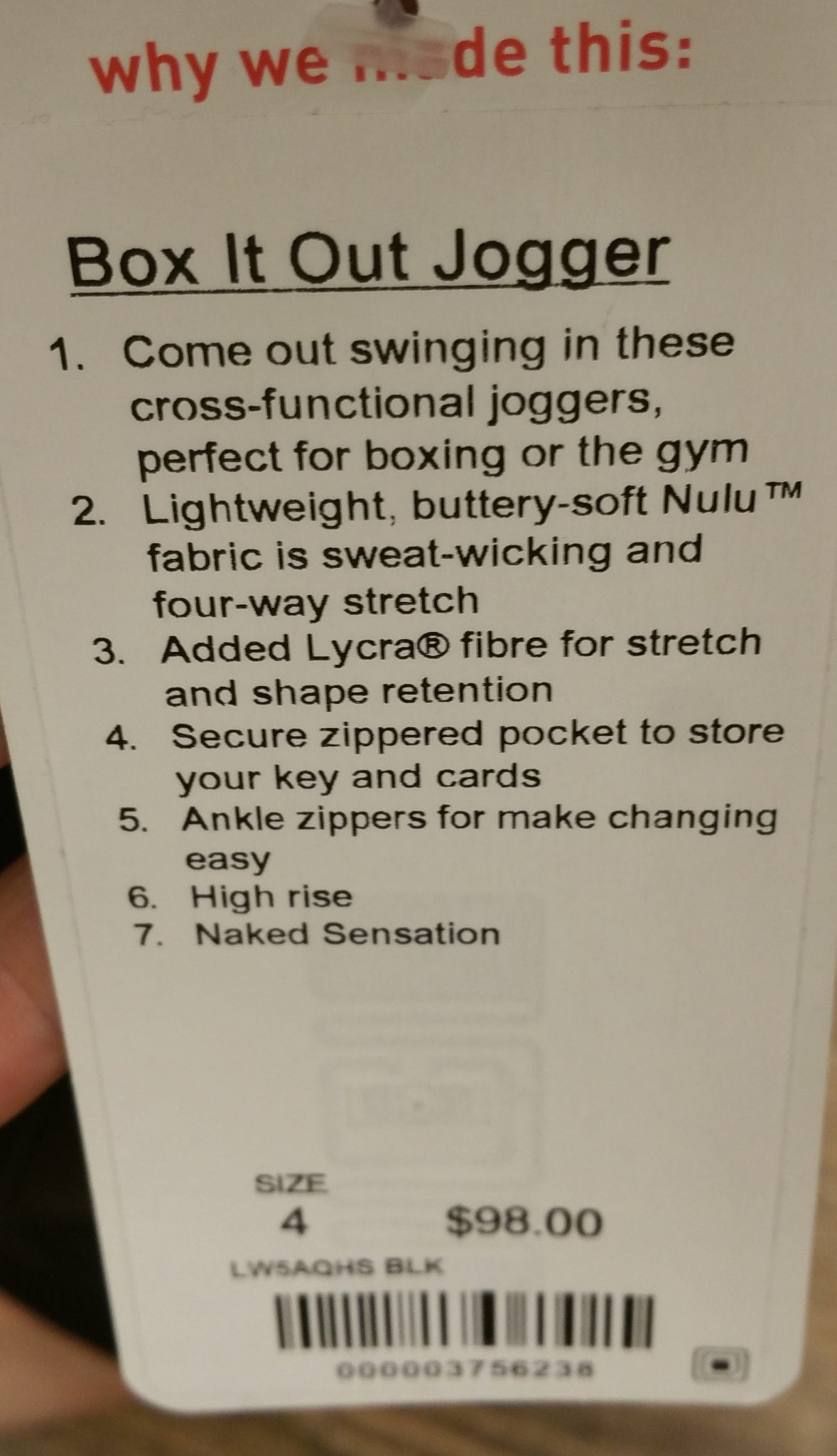 Box It Out Jogger

I really wanted to love these joggers.  Joggers in nulu are luxurious!  I hated the elastic waistband.  Although it didn’t dig in and laid flat on my waist, I could tell if I wore them for long periods of time (like I would want to) the waistband would start to cinch in (like all elastic waistbands do).  The length was perfect for me and the zippers at the ankles were a nice touch.  I can see how it would be functional for boxing workouts for ease of removal.  Generally, I size up in joggers because I like a looser, relaxed fit but these I could stay in my TTS.  If they would have stuck with a regular waistband with an infinity, internal drawstring, it would have been perfect.  I may consider them and deal with the elastic waistband issue if it is marked down drastically.  It may work better for the hourglass shaped ladies out there with the teeny tiny waists.  And if it does, I’m going to be envious! 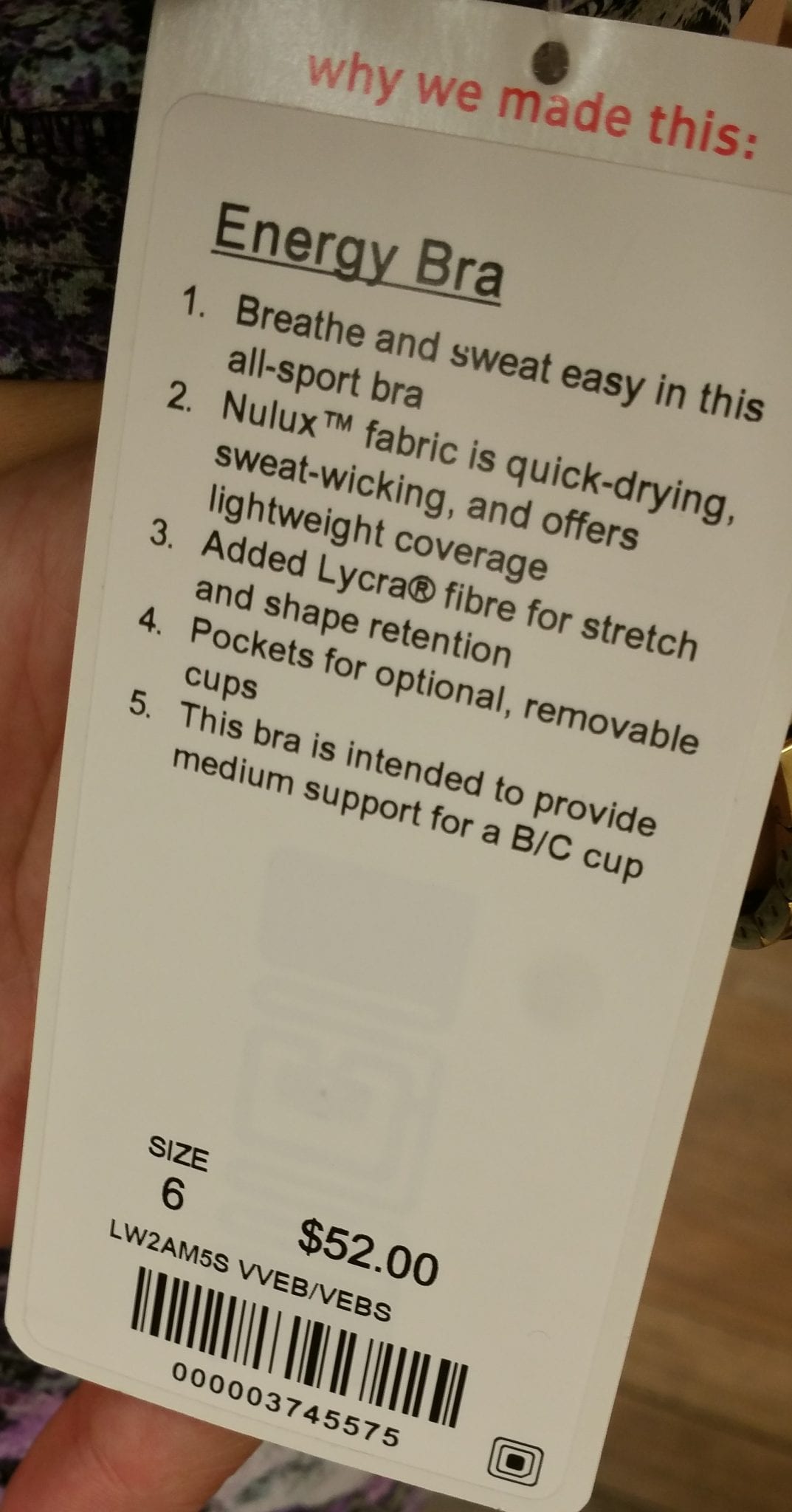 I decided to be brave and do a fit review with the matching set in the vivid vision print.  If I had rock hard abs like Ms. M, I wouldn’t even hesitate.  But I thought you would like to see how the set looked on a non-model figure.  I was undecided on the print.  I can’t decide if I love it or hate it.  When you examine the print closely, it looks like a forest with flowers.  What caught my attention was the vibrant hues of purple and lavender.  The online photos (and my pictures) doesn’t show the richness of the colors.  I was also worried that the pattern on the bottom of the pant wouldn’t work for me because WU tights are generally too long for me.  But they were perfect and did not scrunch at the bottom.  Both the bra and tight was TTS for me.  I tried the tight in a size down because nulux WUs slide down on me because of the waistband.  It’s the reason why I buy Fast & Frees instead. The pattern faded ever so slightly but the waistband was so much better.  The ed thought the pattern barely faded but it bothered me enough to stick to my TTS.  Although the pattern is printed on a white background, it was fully opaque in my TTS and size down.  Tags will stay on so that I can ruminate on the pattern.  Because it’s black on the bottom and black on the top of the bra, I think it makes my waist and hips look wider.  I know it’s just a trick of the eye and not real but who wants to look wider?!  I’m also debating whether I want to deal with a sliding tight.  Perhaps if I limit the types of workouts I do in them, it won’t bother me as much.
The Energy Bra had nice support with a bit less compression than the non-nulux versions.  I was surprised that the price point stayed the same.  I think the other nulux bras are priced a bit higher but I could be wrong.  The bra was TTS.
(On a side note, I saw the dark olive Fast & Free tights at the Beverly Hills location.  They didn’t have my size but the ed searched and found them in several stores in the US.  For those of you that can’t wait for the upload, call GEC and ask which stores have them in stock and do a phone order.)