Tonight I went back to Bikram’s for the first time in over a year. My last Bikram’s class was when I found out I was pregnant with my daughter and of course could not continue with the torture chamber. Lately I’ve been feeling really stressed out and unbalanced and I know that’s been due to the fact that I haven’t been able to take time out of my stay at home mom roll very much and it’s been really hard finding the time to run. I’ve maintained my minimum of 3 days a week of running but I’ve cut corners when I was short on time and I’ve really noticed a decline in my endurance and also a decline in my patience. It shouldn’t be so impossible to carve out 3-4 hours a week for a break but for some reason it has been. So now I’ve decided that I need to do Bikram’s on Sundays in addition to my 3 days a week of running and this should keep me a bit less frazzled and a much happier mommy. When my first daughter was born a lovely Jamaican nurse at the hospital had lots and lots of wisdom to share with my husband and I. The one that stuck out the most was “ain’t momma happy ain’t nobody happy” said in a heavy Jamaican accent of course.  So I’m following nurses orders on this one and TAKING time to myself to recharge.

First class back was pretty awesome actually. I happened to meet a girl in my class who was on day 22 of a 30 day yoga challenge and low and behold she’s an educator at my local lulu store. She recognized me from my frequent visits so we got to really chat about lulu clothes which as you know I like to do. The instructor was really great (and very, very nice on they eyes) and helped point out alignment corrections often which I like. The class was on the hotter side of hot (compared to other classes I’ve been to) and the doors remained closed the entire class. that kind of sucks because I like to plant myself in the back nearest the door so that when kind teachers open the door for a few seconds I get an uninterrupted draft. I had to rely on my mental image of the polar bear swim this time when I was feeling lightheaded. I was able to do all of the poses except for camel which for some reason I have a real aversion to. I took it easy on myself  for the first class though and my goal was really to be comfortable in the heat for the entire time. I prehydrated with about 1lt. of water and a juice box of coconut water and some cliff blocks (I know, overkill on electrolites) and had 1.7 lt. of water during class. I was very nervous about keeping hydrated and electrolited as I’m nursing so I don’t want to compromise that but I’m quite pleased that I didn’t have a headache at all after class or feel dizzy so I must have had the right balance of electrolytes and water. Today I’m really sore in the shoulders and neck but in a good way, as though all of the muscles are re-engaged and not like I’m about to have a neck spasm.  The only disappointment about the class was that the silly dialogue wasn’t really used and I feel I need that to distract myself and keep me from feeling too serious when going into poses. Somehow when your doing a forward bend pose being told to fold yourself like a Japanese ham sandwhich really gets you to lighten up and relax. 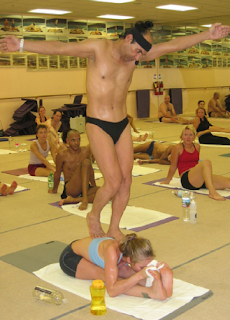 The Newest Winter Items and Colors