I forgot to write a shoutout to lovely Amy and her friend Terry from North Carolina whom I got to meet in the line and talk some serious lulu with. Thanks for introducing yourselves! The time in the lineup went by so quickly!

There seems to be a ton more activity on Instagram this year for #Seawheeze and #Lululemon in general so I thought it would be neat to showcase some of the great haul pictures that are coming up that people are sharing.

I think the Seawheeze expo was really well organized this year. I liked that there was a showcase store lineup and then a runners packet pickup lineup that runners could go to after vs. being forced to pick up packets before being siphoned off into the showcase store while everyone else gets a head start. There was also a strict 15 item limit, and a 5/item limit. That meant you could only get 5 of one style no mater if the colors where all different. The lineup to pay was very huge and snaked around the entire conference room but it actually moved at a decent clip. I think the long line eliminated people from going back too many times but I’m sure as always there are people that are motivated to do that. One thing that I did  not like was that there seemed to be too few products for sizes 8, 10 and 12 and far too much product in size 2 and 4. When I went back in at 1pm to survey how things where selling, the room was practically empty with the exception of size 2 items up at the front, and then a rack or two of size 4’s. From what I understand, size 2 items don’t sell as well in store which is why they sometimes make product in that size and sometimes not – so why then did they order so much product in size 2 and completely underestimate the size 10’s? Judging by how empty the showcase store looked at 2pm, I don’t think it will be open tomorrow at all. Last year there was more product available in the afternoon, and enough for the next morning which will doubtfully be the case this year. I’ve been told that Seawheeze Showcase Store beat last years numbers in sales in the first day compared to the entire weekend last year. Another good thing this year was that the crowd was pretty tame, few line cutters early on in the morning but it didn’t really make much difference since people got let in in mass. I think shoppers where in good spirit and I saw a lot of handing over items they had edited out to people searching which was nice. It was chaos and intense as people grabbed items but generally people where respectful of each others space and I didn’t see any hostility. Did you have a different experience?

The Lightened Up Singlet on the left, in purple was an item I was hunting around for today for about an hour. I’m not a fan of the lightened up in general but I saw this one in a size 4 and I just loved it in this color with the evil eye print all over it. It was in very short supply because I only ever saw one size 4, and one size 8. The Swiftly SS on the top right came in vintage pink (same image on it) and white (same image on it in a barely visible yellow). The White Swiftly with barely visible yellow print was pretty much all that was left over at 1pm when I went back in to survey how the items sold. 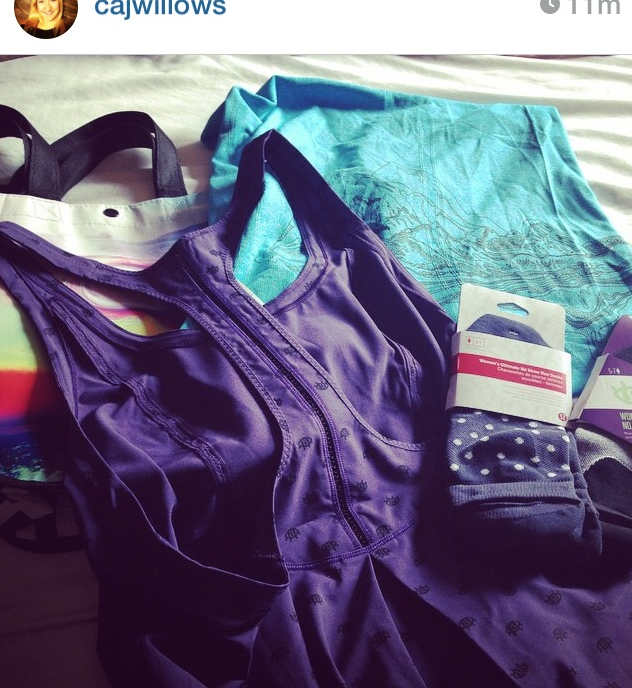 This was a very pretty Cool Racerback that I never found in size 8, 10 or 12. There seemed to be a lot of items that either didn’t come in those size or they sold out within the first 5 minutes. I was about 200-300 back in line but I was let in in the first round of entries once the doors opened and the people at the very front of the line really only had about 5 minutes on me, although they did rush the doors.  Those extra 2 hours of sleep where well worth the 5 minutes. The earliest person that arrived to line up was there at 1:30am, and I arrived sometime around 4:45 am. 4:45 wasn’t too terrible considering I’m usually up at 5am for the gym anyways so I didn’t feel the effect of being up that early until around 11. 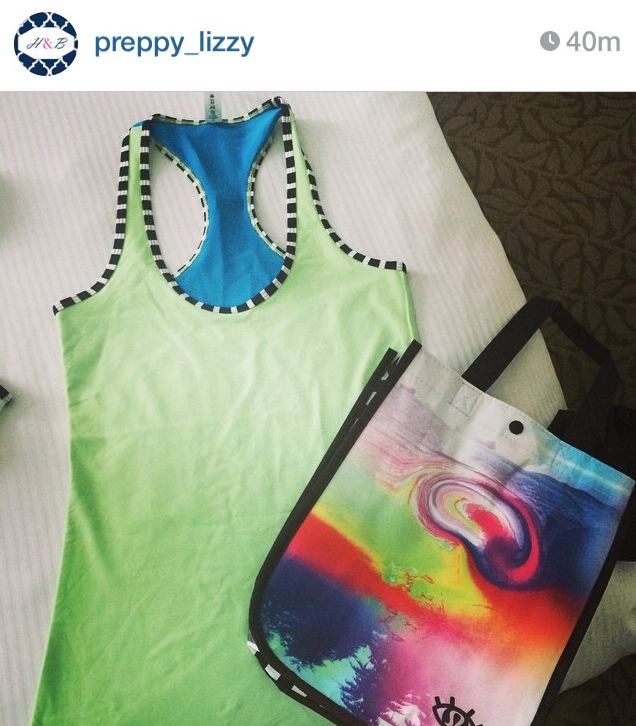 The Cool Racerback on the right is one I had initially grabbed but then opted to leave behind. Like I said in my earlier Seawheeze post, I pretty much loved all the CRB’s but I was on a limited budget today (due to our washing machine flooding two days ago!). The tie dye landscape print was very popular and I think those items all got snatched up right away, although I don’t care for it so I wasn’t looking for anything in that print. 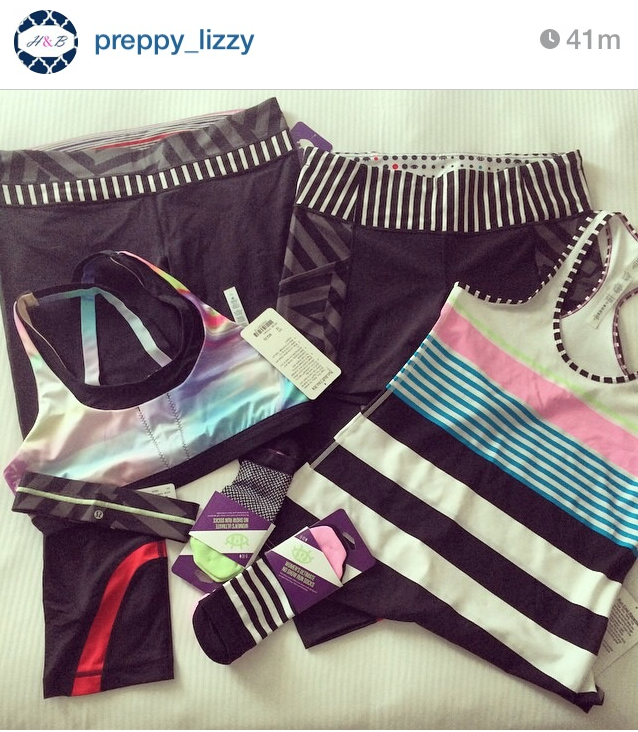 My favourite item. There were two versions of the Tuck And Flow LS and the stripe placement was the same throughout the sizes (same with the striped CRB’s) so you didn’t have to pick and choose stripe placement. The stripe placement on these are very flattering. The only item you had to look at for print distribution was the tie dye landscape which was variable amongst all products and sizes. Initially I could only find the T&F’s in size 8’s so it looked like they never came in a size 10 (5 minutes in) but then I started seeing some get restocked from the leave behinds and I managed to score my preferred size 10. And as soon as I came back to look through them all the size 8’s and 10’s where gone. 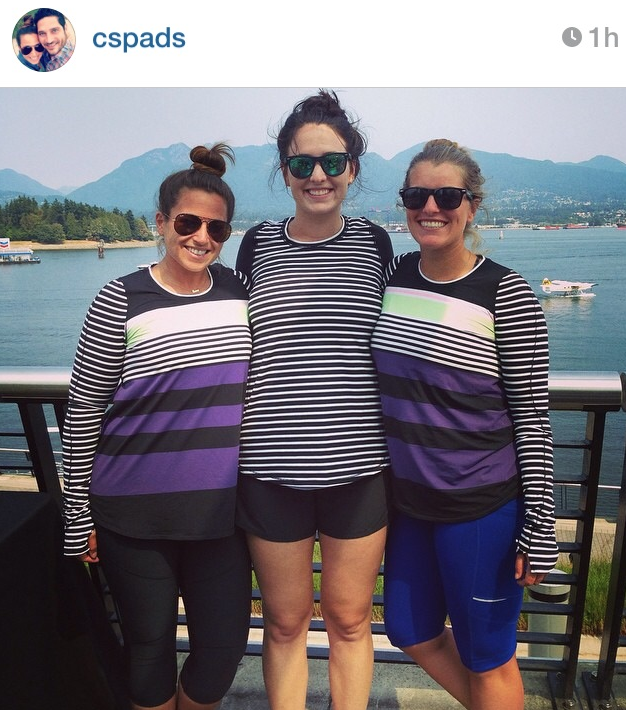 Another shot of the Swiftly SL print. It is Mountain and Ocean in Japanese Printmaking styled illustration. There was another Swiftly SS in Concord Grape with an Eye logo on the front. 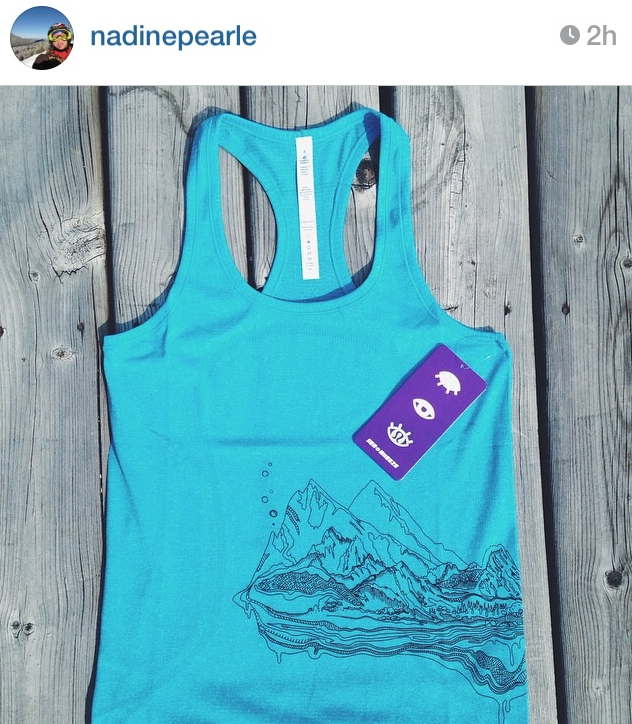 There where lots of Tie Dye Swiftly SS’s left over at 1pm. It was pretty much the only thing left for sizes 8,10,12. The Scuba in this graphic black/white print is super flattering on and has some very pretty contrasting details in the logo and the zipper pulls which are red (love red) and blue (surge?). The side panels being black is what makes it so figure flattering. 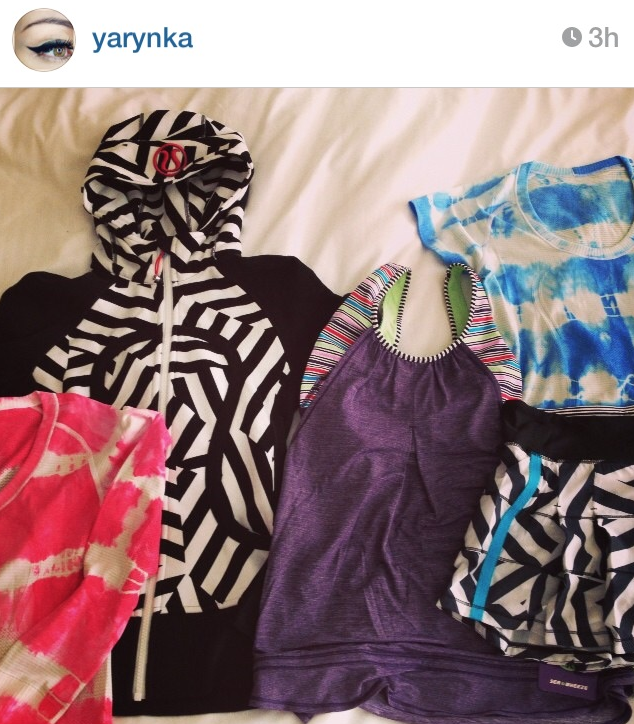 What the Cool Racerback racks looked like probably about 30 minutes in. 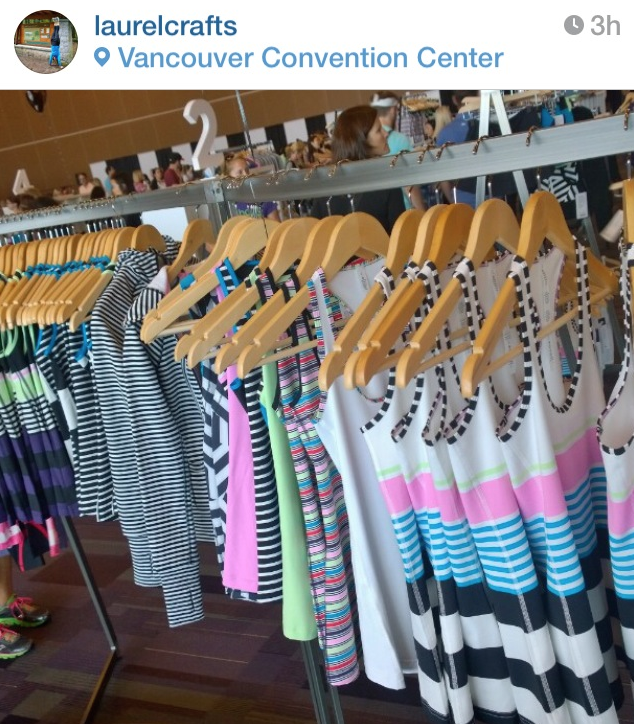 The Downtime Jacket was super adorable in all three versions. This plaid, my favourite which was a grey and white tonka stripe with Vintage Pink Trim (darn! If I had more cash I would have gotten one) and a black/white graphic print with green trim. Those all flew really fast. The Speeds on the bottom left here are very cute. They have the evil eye logo throughout and they where very silky feeling and 4-way stretch. Those flew quickly too. 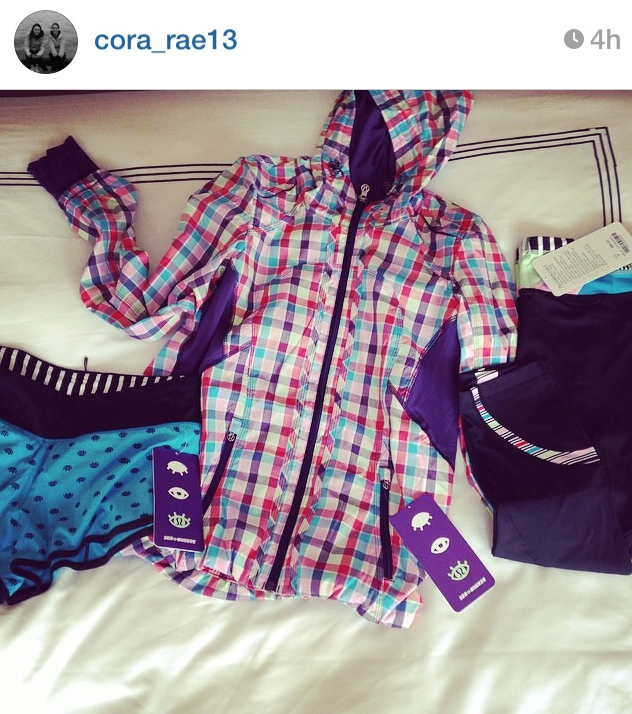 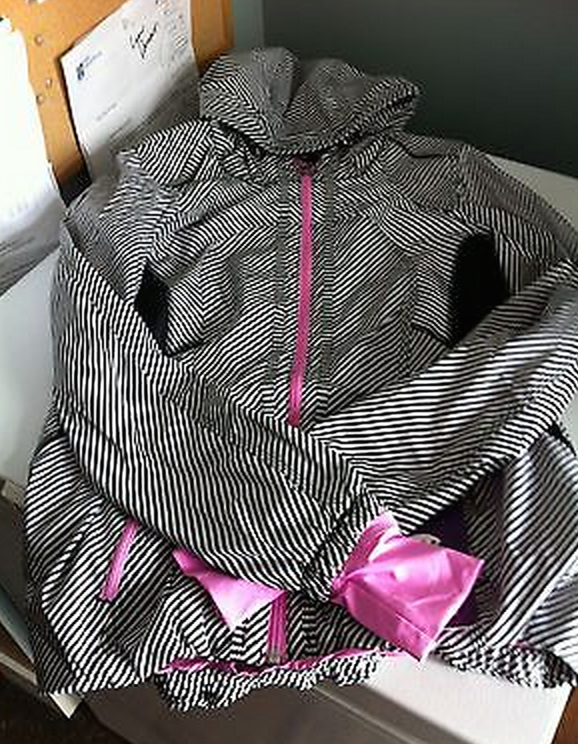 Another item I really liked and if I had a money tree I would have gotten where the Run Inspire Crops seen below in the black/white stripe with Vintage Pink trim. Its the same print as the Downtime Jacket I mentioned above. 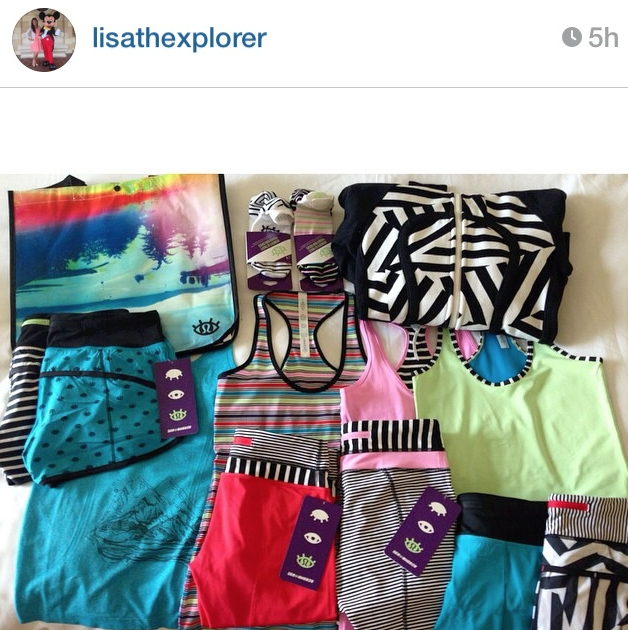 The Inspire Crops on the bottom here in the black/grey/green motif was a very hot seller and I didn’t even see them myself. I know a few people where hunting around searching for those specific ones but they sold out. 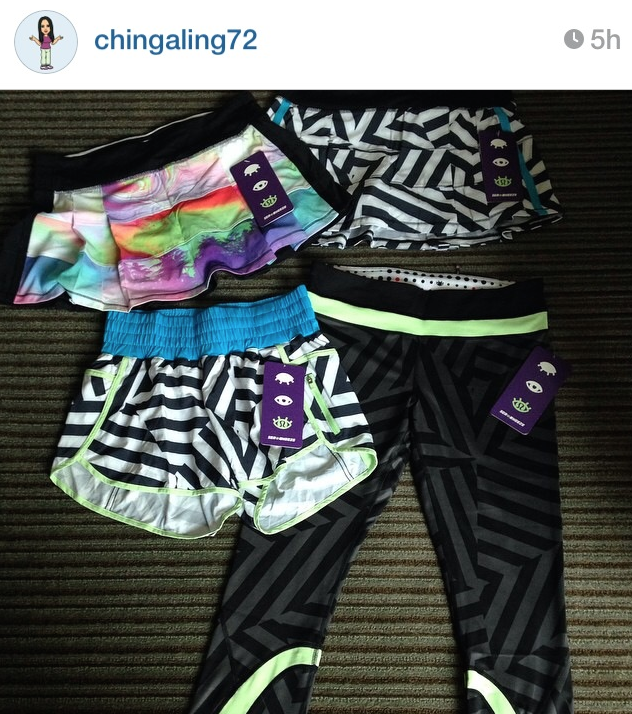 Double Back Tank and Shanti Crops