And The Verdict Is…

Yesterday I ordered two Inspire Pullovers, one in Lolo and one in Black, with the intention of keeping just one of them. I also ordered a Senorita Pink Ear Warmer. In the meantime I had gone in to my local store and tried on the only Inspire Pullover they had which was the Static Wave Stripe. Of all the colors I’ve tried on since receiving my order I liked black one the best on me. I love lolo purple in everything else, it’s flattering to my complexion and coloring (brown hair, green eyes), but in the Inspire pullover it looked (as reported by others 🙁 boo! ) too busy and it washed me out. The good thing is that the Black will look really nice with whatever accessories I want to wear with it (Senorita Pink Ear Warmers) and whatever top I put on under it will pop nicely. As far as the fit goes the 8 was the right size for me. Although the Static Wave Stripe was not too flattering on me in an 8 with all of the clingyness and stripes but the black hid everything nicely and actually felt a little roomier around the middle for some reason. I can wear the black one with jeans but I would not have worn the static wave stripe one with jeans. I checked out the seam issues that My Superficial Endeavors reported on this morning (the pocket is not sewn in on both the top and bottom as in prior running pullover designs) and both pullovers that I ordered have the same issue, though I did not find it itchy or scratchy on my back when I tried them on. So now I have to decide if this will become an issue for me when I use it for running. I do really like it a lot so I’m very hesitant to take it back. The Senorita Ear Warmers I love, love love!

On a positive note, all of this talk of other running pullovers on facebook yesterday got me really curious about the Spirit Pullover (Tech Fleece) and the Hills Pullover (Running Luon) which I never got to see in stores when it was released (probably because I was pregnant) and low and behold a pretty blue used only one time Spirit Pullover was listed on ebay today in just my size. I was able to snatch that baby up and I look forward to trying it out. It has a hood on it which I’m always dubious about for running. I hate hoods that flop around when I run and they disturb my peripheral vision when I use them, but a reader yesterday mentioned that it’s such a snug fitting hood that this is not at all an issue. She was adamant that this is the best running pullover ever made. I promise if I’m even the slightest bit unhappy with this top I will resell it to you as I know there are eager little hands out there that would be “on this like a dirty shirt” ;p. 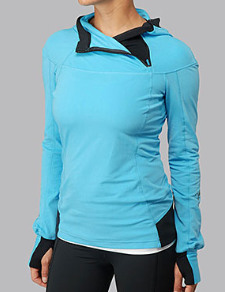 ps…my gramar is horrible in this post. I will edit this shortly but right now I’m rocking, swaying and shushing a teething cranky baby.

Cristina founded The Sweat Edit community in 2010, from her home in Vancouver, BC. She loves working out when she’s not at work managing the website. Her favourite workouts include olympic weightlifting, crossfit, running, and spinning on her Peloton. Favourite Peloton Workouts: Power Zone Training with Denis Morton or Matt Wilpers. Read about The Sweat Edit for more.

This Winter’s Must-Have from lululemon: The lululemon Brushed Softstreme Ribbed...

You Need These Wide Leg Leggings From lululemon! The lululemon...