This post is probably most interesting to my local Vancouver readers, or readers in Calgary, Toronto and Montreal who get their Nordstrom Vancouver Warehouse Sale hosted by StyleDemocracy at a later date. I wanted to give you guys a post so that you are prepared should you be interested in attending one of these Style Democracy hosted sales. The sale in Vancouver is on from March 21st to March 26 and is located at the old Best Buy location at Queensborough Landing in New Westminster.

The sale officially opened at 11am today but I showed up at 10:30 and immediately saw that there was a massive lineup three rows deep along the front of the building. I was easily able to find a parkin g spot nearby but had I arrived a few minutes later I would have probably parked across the parking lot.  I’ve read rumours that some people lined up at 7am, but that really wasn’t necessary since most of the three rows of the cue where let in in the first wave. I was second wave but got in at 11:15 so technically I only waited 15 minutes, even though I was there early at 10:30. 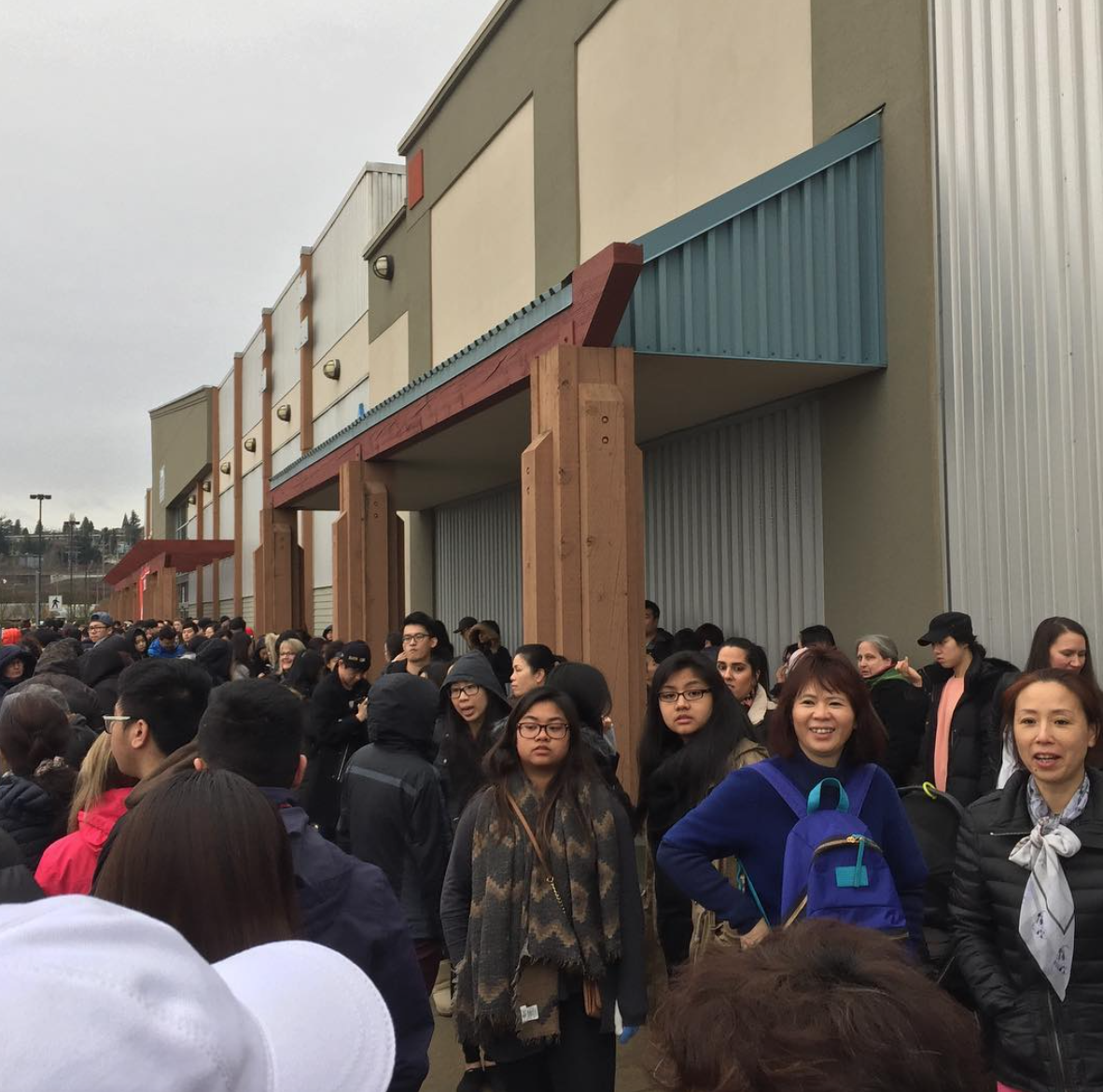 As soon as I walked in I saw ‘shoe tables’ and immediately b-lined it there to do my initial scan of my size. I was disappointed to see that there weren’t any of the shoe brands I was hoping to see. I clued in pretty quickly that there was actually a partitioned section for ‘Name Brand’ items over $30 and I had to line up again for that. This photo below is me waiting in that line. That line took about 30 minutes and the line was very slow moving and got worse and worse over time. I could see from my spot in the line that there where tons of great shoes in this section. I saw lots of Rag and Bone Boots which you probably know from my Nordstrom Anniversary Sale posts, I love them.

Once in you are told you must check out with your name brand purchases in that section before going back to the other section. You also cannot take your finds from the other section in with you, but you can check them at a counter. I highly recommend hitting this name brand section up first because this is where the higher margin discounts are found. The checkout lineup in this section wasn’t bad at all.

I filled one of the provided shopping bags full with shoes that caught my eye that where my size, and went through my finds in another location. I saw a lot of Kate Spade, Tory Burch, Rag and Bone, Aquatalia, Paul Green, Bed Stu etc. There was also a table of handbags but in my quick scan I only saw items like Rebecca Minkoff, Kate Spade, Tory Burch and Moschino. 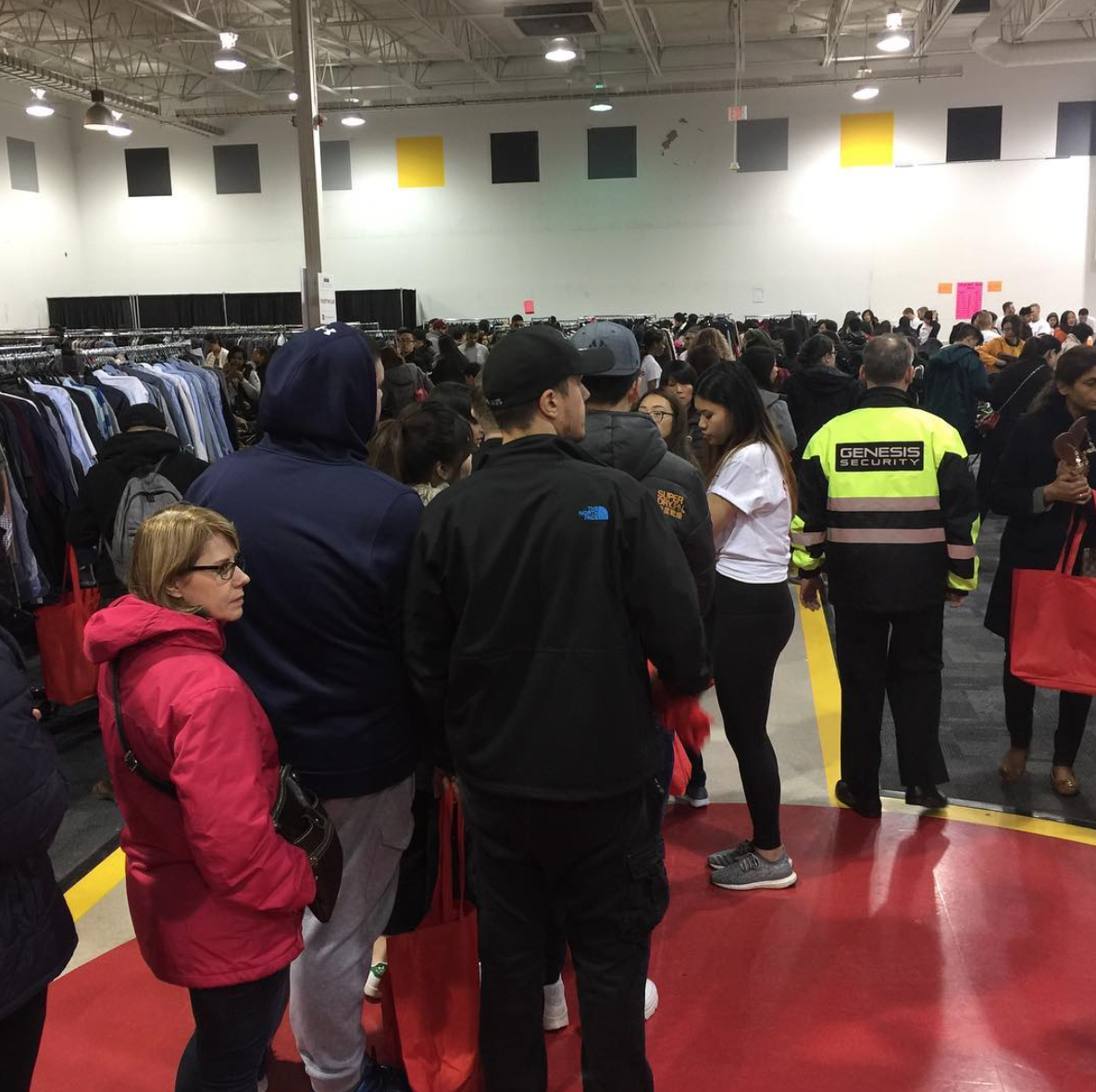 I found 4 pairs of Rag And Bone Boots that I loved. A tan pair of Newbury, these black Newbury, Harrow boots and these flat rounded toe suede ones. Many of the Rag and Bone Boots I saw at the warehouse sale are currently on the website for $692 and $734, they where marked down to $99 at the warehouse sale. Some of them where leftovers from the Nordstrom Anniversary Sale (the tan and taupe selections) but they where much further reduced in price from around $300, to the $99.

I ended up snagging these black Newbury boots but I really fretted about which ones to get. The tan pair in this style was my perfect tts, but these which I preferred the look of where a size up. In the end I got the ones I preferred, and when I got home I shoved an insole in and now they are the perfect fit. Even without the insole though they feel roomy but my heel wasn’t slipping out.  I’m really glad I took a chance and grabbed these because I know this color will get much more use in my closet. 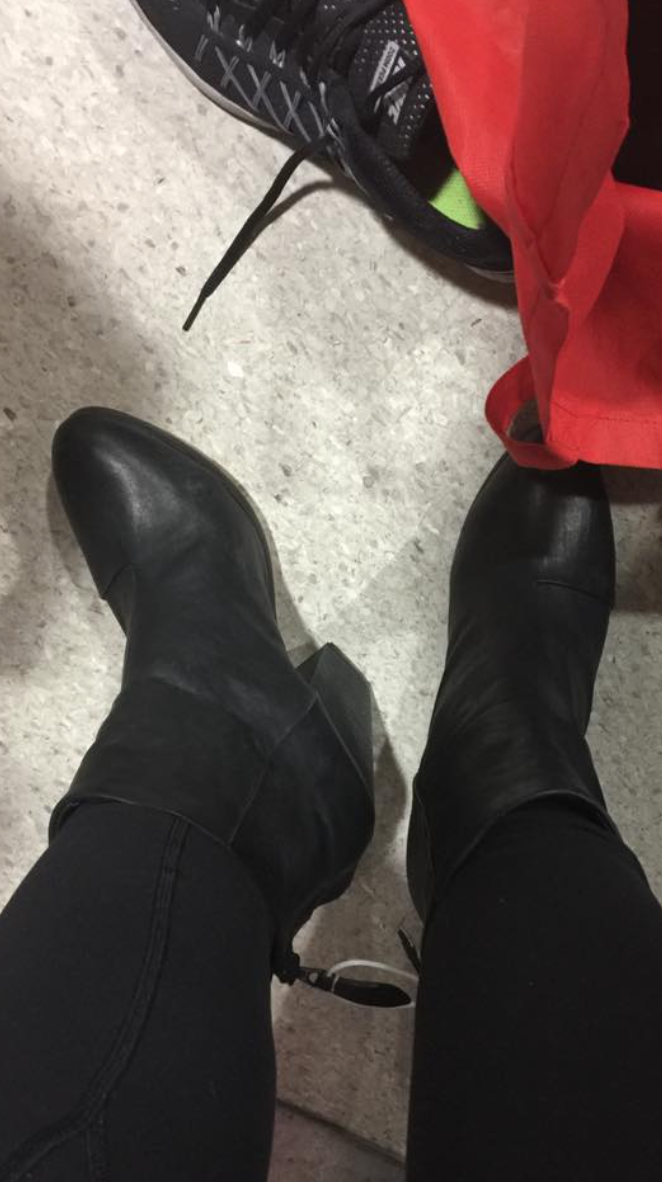 These where a really cute, much more casual pair of Rag and Bone Boots. They where a much lower heel and a rounder toe box so I could see these being comfortable enough for daily wear. I ended up leaving them behind though because I didn’t love how the shoe opening was more narrow on my leg. I wasn’t sure I would love how they would look with skinny jeans tucked in, and I didn’t like how they look with my pants over top. These are tough to style because they are not quite a chelsea boot, not a biker or cowboy style. 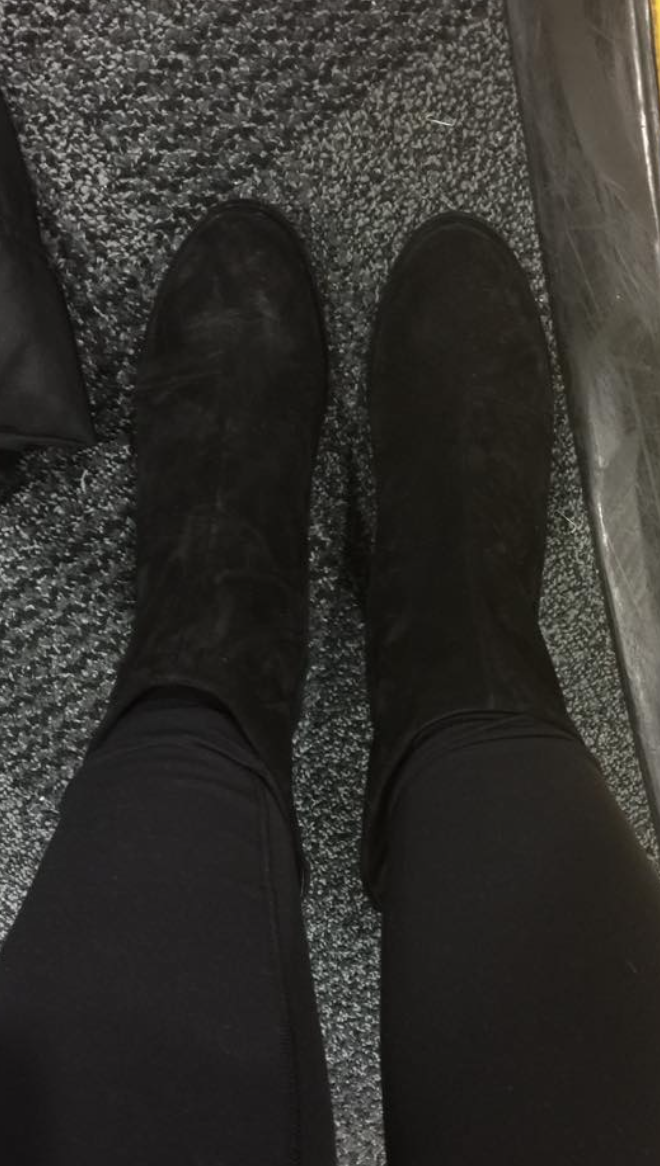 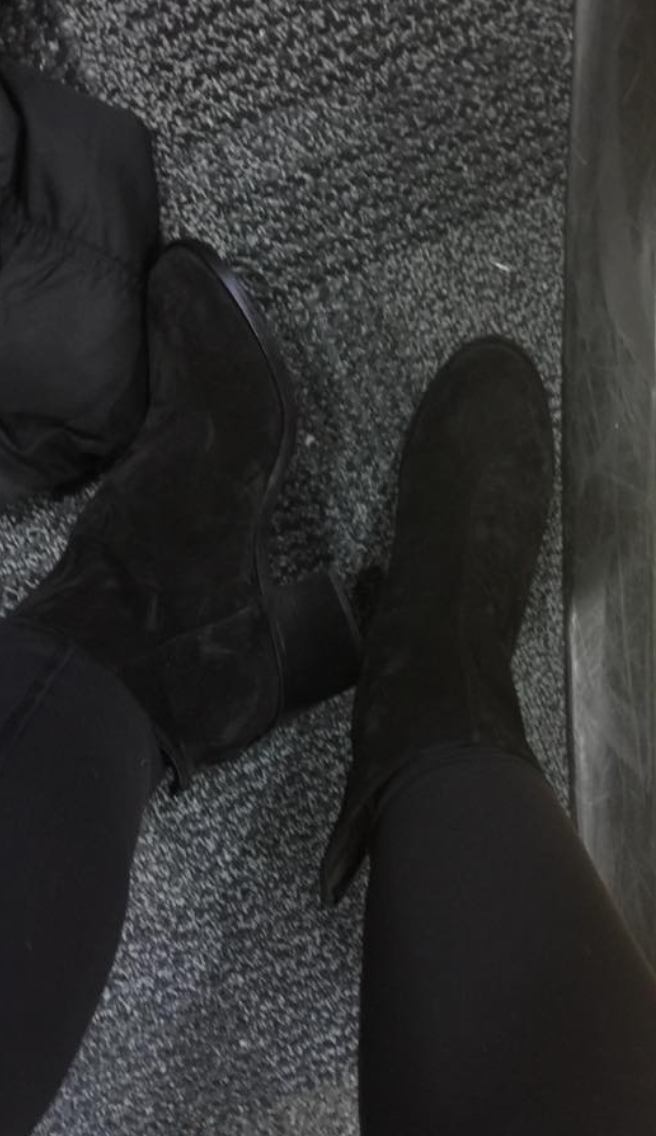 Here I am in the final stages of deciding what shoes. This took me a good 25 minutes of reorganizing my bag. As you can see I’m wearing the tan Newbury boots here, and the black suede boots, and another pair of boots inside the bag which I already knew I had to have. I am a boot hoarder.

The boots I *had to have* where these pointy Acne Studios boots. A few months ago my husband was wanting birthday ideas from me and I was being a brat and showed him these Acne Jensen Boots I’ve been coveting. They are a ridiculous price at $800 so there was no way I expected getting them and I would never in a million years pay full price for them so he just laughed at me and it became a running joke that I was asking for ridiculous shoes for my birthday. I kept them in mind because there was a pair at Town Shoes that looked very similar for $180 and I like keeping pins of items I like in case I find them on sale or I find a more affordable versions somewhere else. These Acne Cony Boots popped out at me and I snatched them up feverishly. They where marked down to $200!! There was a hitch though. These are a full size smaller than my usual size so I wasn’t sure I wanted to risk getting them even though they fit my foot fine, and the length at the bottom was the same as the Rag & Bone Newbury which are a full size larger than my size. I circled and circled and dug through boxes in search for another size. I found a few other Acne Studio boots but they were all garish colors, or even smaller.  I decided to risk it and bring them home and have them stretched if need be. I’ve been wearing them all evening and they are fine with thin socks, but tight with thicker socks so I will give them a week before deciding if I need to have them professionally stretched. 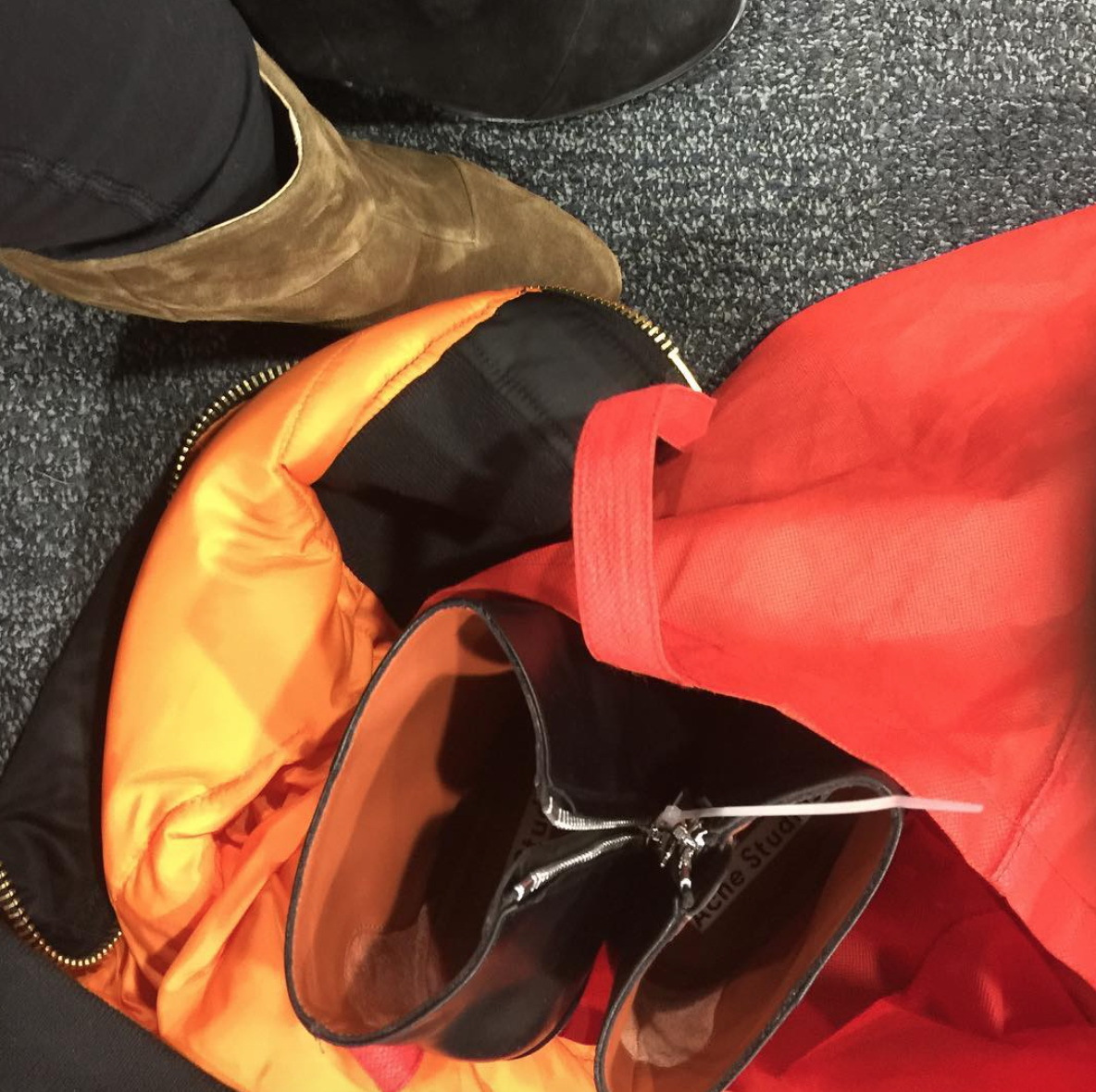 My final haul. Two pairs of shoes for $300, original retail price for both of these combined would have been $1600. Wearing in the Acne Cony Boot at home all evening. As I mentioned above, I had been coveting the Acne Jensen Boot, but fell in love with these Cony Boots which are quite similar. There where a few Jensen Boots around but one was denim, and the other was patent nude. Neither of them where colors I would wear so I was more than happy to find this version. I think these are actually more comfortable with the lower wedge heel and slightly more feminine. 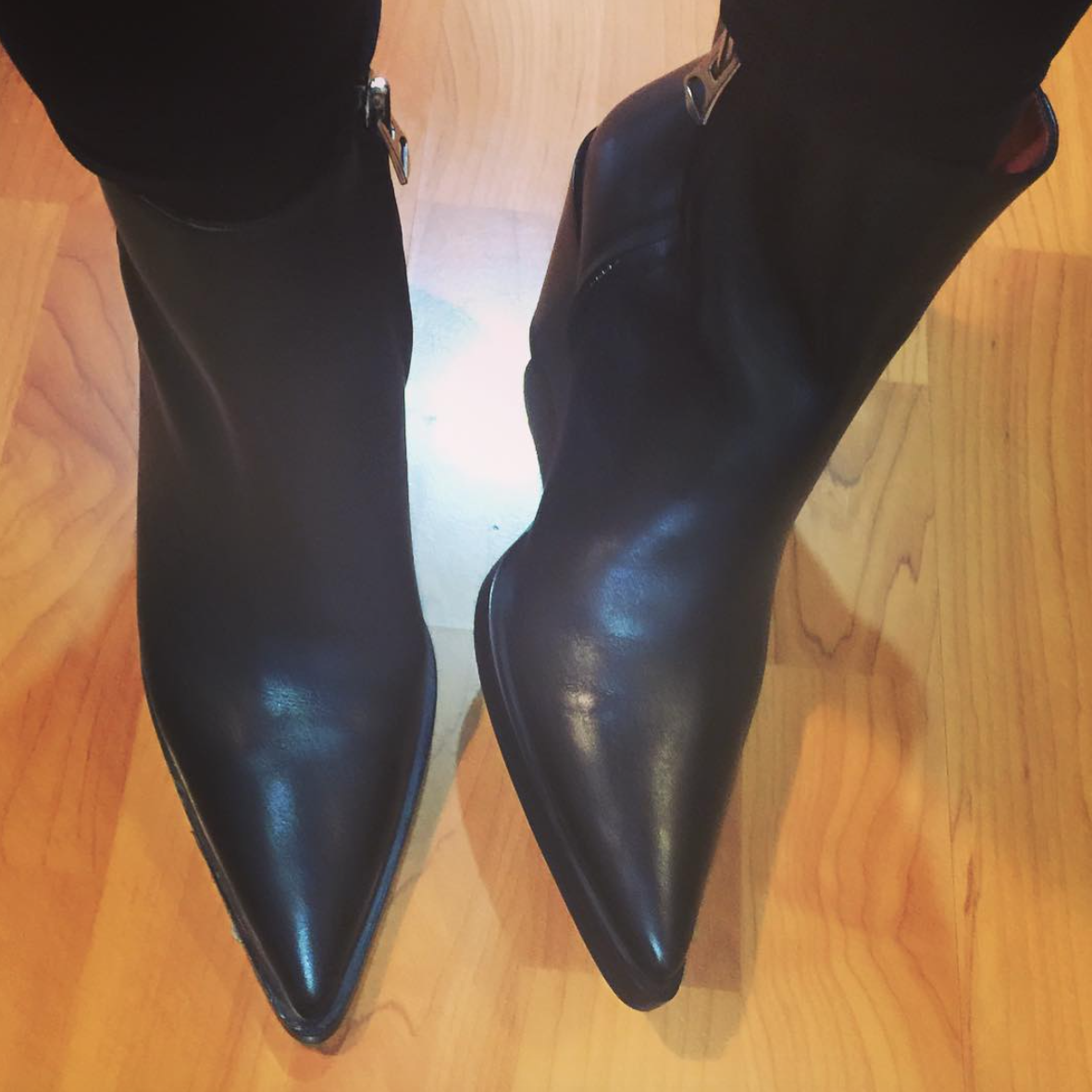 My husband is in dire need of new dress shoes so I was hunting around for him as well. The mens shoes was only one single folding table long and the majority of shoes where very casual. It was quite a disappointing selection for men in shoes as well as clothing and accessories. I saw these which where sort of nice and very formal but not really what either of us would have picked – so we ended up  passing on them. I’m sad I couldn’t find him something since he is the one that properly needs shoes, and I was shopping for sport. I had seen on Instagram that there may hae been John Varvatos dress shoes but if that was correct they had long since been sold through. 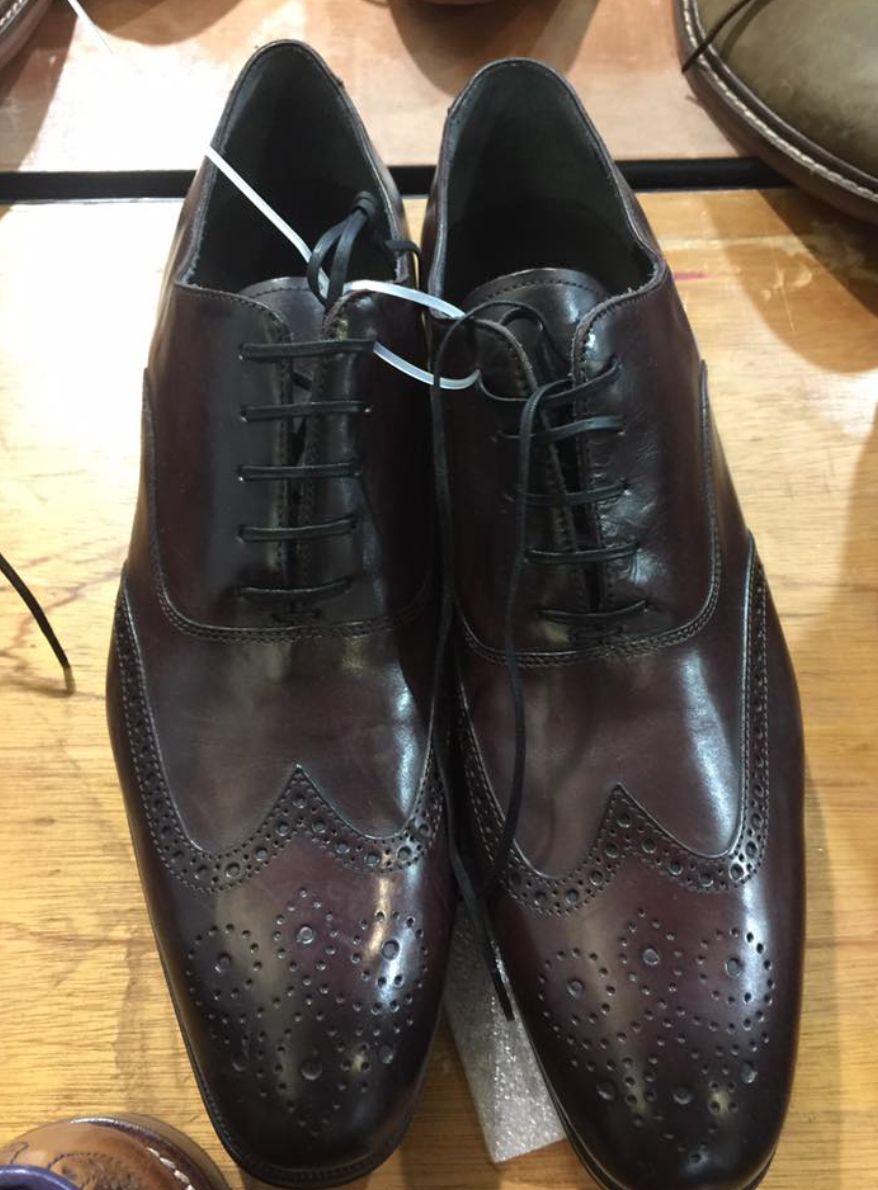 I took a look through denim and there where a few random Rag and Bone Jeans, Paige Jeans and Citizens but very few sizes. I maybe saw 5 jeans that caught my interest. I also didn’t see any great jackets – I had been looking out for Mackage Jackets or something similar but there was maybe one or two straggler jackets hanging on the racks. I didn’t care for any of the formal clothing. I was also looking for Hanky Panky underwear but didn’t see any of those, or any great bras like Natori or Chantelle, Wacoal or Simone Perele. I didn’t see any North Face or Patagonia items, or Alo Yoga.  These are things I comb  markdown racks at Nordstrom for.

In the non name brand shoe section I saw a lot of Badgley Mischka, Ugg slip on runners, Tory Burch wedge flip flops (only size 12), Halogen, Borne and Nikes. I was also looking out for summer sandal wedges but there wasn’t anything I liked. There was definitely more variety in the fall boot department.

Overall this was definitely a worth while visit for me because I found amazing markdowns for myself in brands that I always already look for. I found it more worth while and a much better value to find high ticket items marked down by 80% over some of the cheaper items marked down 40%.  I frequent Nordstrom Rack a lot in the US so I was also very aware that I could find great bargains there and a lot more volume and variety,  but with the Canadian dollar so low you really have to be careful with spending in the US. I don’t think I could have found the deals I found in the US for cheaper once you factor in the exchange rate, potential duties and taxes, and travel costs. I’m really hoping that with the success of these Nordstrom Canada Warehouse sales that Nordstrom will consider opening up a Nordstrom Rack here. We already have a Saksof5th and a Nordstrom Rack would be very received.