I stopped in at the store today for my typical post upload store visit since lately most items are uploaded to the website before they hit store wide. Thats really kind of a bummer since we don’t get to see a bunch of pictures up online ahead of the upload in order to see how items fit and so I find I order more online to ‘give it a chance’ but then I also end up returning more items to stores then I used to. Ah well. In this case I opted out of the Play In The Sun shorts when they were uploaded but when I tried them on in store I fell in love. The Dune version are much less see thru than the white (I’ll have to get the husbands opinion on that later) and they were really cute with the stronger contrasted buttons. These shorts are definitely made to flatter…shall we call it ‘deadlift butt’. They flatter a more ample bottom with the pocket design however I’ve seen pictures where the pocket design and placement looks really bad on more slender figures.

Anyways, I really liked the Dune. It’s a safe ‘white’ that will go with a ton of items I already have and it’s pretty much as neutral as black/grey/white. The Concord I was very surprised to love. I knew I loved the idea of them in Concord but I figured they were too ‘showy’ and colorful but when I put them on I realized that it’s actually much easier to pull off this color in shorts than it is in pants for me. I was wearing the Blush Quartz Jacquard Mesh CRB and the combo looked adorable together. I found the Concord shorts fit snugger than the other colors but not enough that I wanted to size up. Also snugger than the Dance Studio Crops. I stayed TTS in these as I’m sure most of you will.

I also tried on the Run: In The Sun Shorts and they have so much great potential for those of us that cannot wear most of the Lululemon run shorts designed for smaller thighs. The legs were definitely roomy enough for my large quads but the rise was just a touch too short and so the darn pleats (which I hate!) sat open and it just looked weird. If the rise was just a touch longer then those pleats wouldn’t be hanging out at the widest part of my hips and they could be safely hidden underneath a longer top. I’ll likely try them again at some point but I because of the pleat I just couldn’t love them even though they were perfectly functionable for running.

Run: Play In the Sun Short 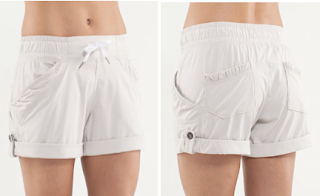 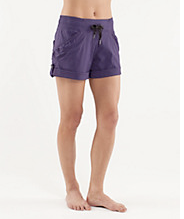 Run: In The Sun Short 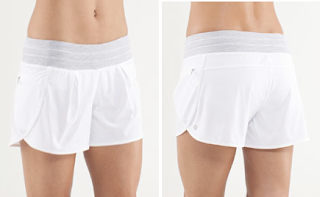