Lululemon guest fit review today care of Mrs. O! I definitely want to try on the Mesh On Mesh Pop Over.

Mesh On Mesh Pop Over, On The Fly Short 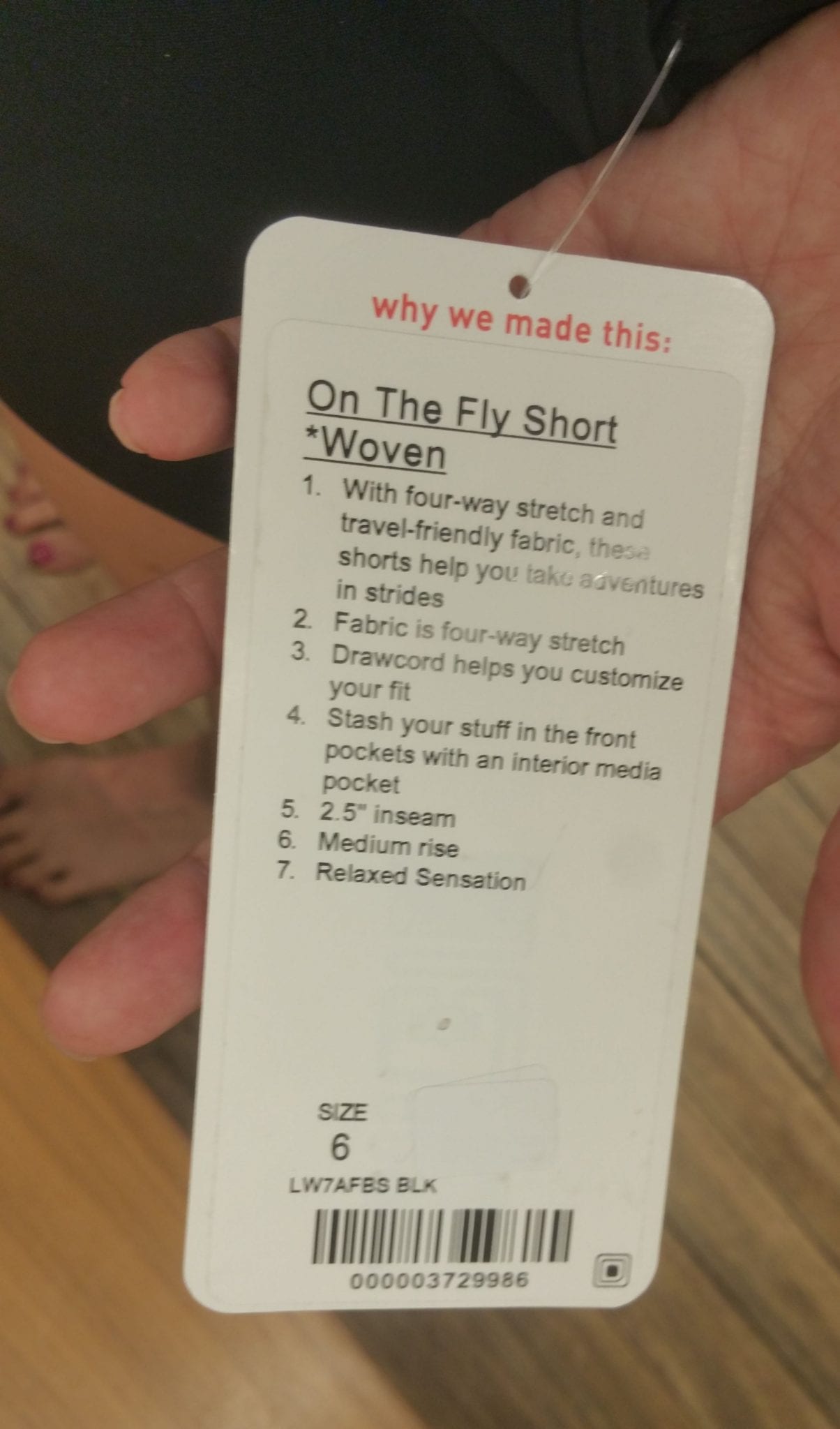 I wanted to try on the shape short but the store hadn’t gotten them in yet.  I tried the on the fly short because I’ve never tried them on before.  I liked that they were a non-sporty, casual short.  The fabric and cut was nice.  But as always, pockets pull across my thighs weird.  I didn’t have the energy to try them on in a size up.  So, while the shorts were TTS, I think I would have preferred a size up.  I liked the shape from the back and found it to be flattering.  The length was also nice.  I may consider trying them on in the size up; that is, if I don’t like the shaped short better.

The Mesh on Mesh Pop Over was a size up for me.  My TTS fit but it was harder to get on and off because the mesh wasn’t as giving.  The mesh was soft and not scratchy.  I like the idea of a mesh pullover but I think I would prefer it in a bomber jacket style.  The opaque part of the pull over was high enough to make me feel comfortable and not feel like I was exposing too much abs.  Although I don’t think I would wear this pullover with only a bra; most likely I would wear it with a full tank.  I’m undecided on this pullover.  I’d like to try it in white.  I may reconsider it if it goes on WMTM.
Too bad hubby wasn’t with me so that you could see the full effect of the pullover.  I took so many photos trying to show more of a front view without my hand and phone covering most of it.  I wasn’t successful.

The twist and train crop was TTS and a 9.5/10 in sheerness.  If you did a really deep knee bend you can slightly see through the fabric.  The bend test was opaque enough for me.  (As you know, I’m really sensitive about sheerness.  I don’t want people looking at me and wonder why I didn’t buy a larger size).  I love the jaded color.  Unfortunately, my photos don’t do the color justice.  I wasn’t sure if I’d like the lace-like mesh but it was a nice feminine touch.  The lace felt sturdy and smooth.  Not itchy at all.  As you can see, the mesh is not too sheer; it had more coverage than I expected.  The band on these crops was really comfortable.  It was easy to get over my hips, stayed flat without digging in and not too tight.  I generally dress sporty when I workout so I wasn’t sure if I’d like them.  But surprisingly, I really liked the crops and ended up purchasing them!  I’m liking the newer, more feminine items.
I realized when I got home that I should have taken photos from the back mirror so you could get a better full length picture.  Next time! 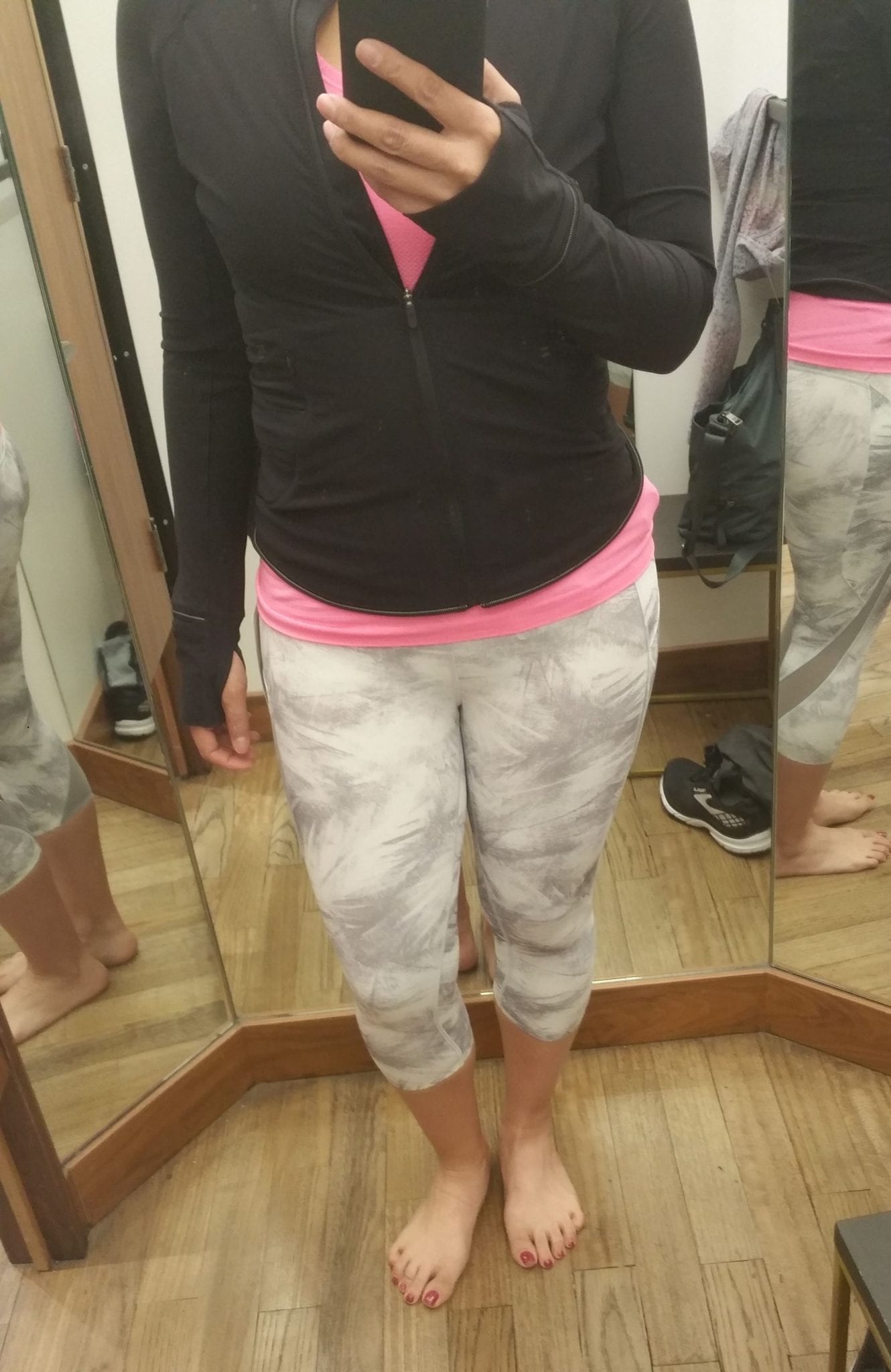 I ordered these online and am waiting for them to arrive.  Since I was in the store, I decided to try them on.  These crops were TTS and not sheer where it was double paneled.  Between the band and double panel, there is a small patch of fabric that is a bit sheer.  It didn’t bother we because the “important” parts were opaque.  The band is bonded but fit flatter and smoother than the mind over miles crop bonded band.  I think it is because the bonded portion of the band was wider.  I thought I would have a harder time getting them over my hips but it wasn’t as difficult as other tights.  Once on, it fit nicely.  I’m uncertain whether I will keep them because of the price and I felt that the print made my thighs look wider.  Who wants that?  It’s a nice compromise to an all white tight for me.

These tights were TTS and a 9/10 on the sheerness scale.  The print is printed on a white background and I didn’t think the pattern dissipated much on the knee and bend test.  The ed didn’t think it was sheer at all — just a bit of white coming through.  I would have to try it on in brighter lighting to determine if it is actually sheer or not.  I was surprised that I liked the print on a full length tight.  The picture is a bit more muted than the actual color in person.  You could definitely see the pinks but I think my bright pink tank took away from the pink in the tights.  I was too lazy to find a matching tank so I just tried it on with the tank and jacket I wore to the store.  I didn’t end up buying them because I’m going to wait and see if the print comes out in a crop or short.